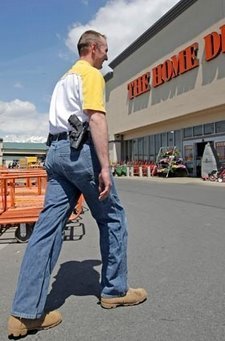 The media is faithful partner with the more-gun-regulation-is-needed crowd and it must stop. I challenge the main stream media in Connecticut and around the country to do some honest reporting on this issue, but I don’t hold much hope.

From our friend John Hinderaker at Powerline.

The Minneapolis Star Tribune reported yesterday that the State of Minnesota issued 31,657 permits to carry handguns in 2012, a record number. No surprise there. The Strib puts that number in the context of the current debate over gun control, and concludes with these statistics, presented without comment:

Minnesota’s permit holders have committed at least 1,159 crimes since 2003, including 114 in which a gun was used, according to the BCA.

Wow, sounds like a regular crime wave among gun permit holders! But what do those data actually show?

That sentence written by Paul Walsh comes from a piece listing general statistics on carry permits that were issued in Minnesota during 2012. He took the liberty to combine all of the crimes committed by permit holders during the last eight years to come up with 114 crimes where a gun was used. This is absolutely infuriating. When taken at face value, it sounds like the permit holders are a violent bunch, but in reality, permit holders are much less likely to be involved with any sort of crime, and they are better drivers too.

Please, go to Hinderaker’s post and review the information. In short, the data is available to show permit holders in Minnesota are much less likely to commit homicide, be involved with crime, or to be convicted of DUI as compared to the general public. It is important to note those with permits have gone through a background check and by definition are – in general – law-abiding citizens to begin with, but the issue here is the portrail of permit holders by the media, anti-gun mayors and police chiefs as people who need to be monitored because of their interest in firearms.

Will the Connecticut media do some reporting and look into the Connecticut data? How do Connecticut permit holders as a group do compared to the regular pubic when it comes to committing domestic violence and violent crime with and without firearms? How is their driving? The problem is coming up with this information is difficult for the simple fact we protect the names of permit holders. This is a good thing, but there must be a way for the state to spend a day or so and run the numbers and provide the statistics without any personally identifiable information.

I’ll note that WTNH provided some factual information in an 11 p.m. newscast that has only received about 3,400 YouTube views so far. The piece is certainly not perfect, but at least the information is pretty accurate.

Correction Request: NBC just said you can buy guns online and at gun shows without a background check

The Supreme Court and climate change

“Safe” is a Relative Term [Updated]

Yes, you can open carry a pistol in Connecticut
14 replies

Face it: they just don’t trust you….
Scroll to top