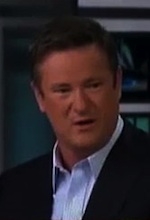 I wasn’t even going to post this but of the three Morning Joe bites I have on You Tube, with no publicity, this one seems to be getting attention. Try to ignore the e-mail Mika gets on her blackberry at the beginning of this clip. The WH is on vacation so it can’t be from them (Just kidding Mika) … but there is no way to ignore Scarborough.

Even in his “harshest” conservatives days, he says, he would have been embarassed by the reaction of the folks who”fear” the mosque? What is he talking about? Harsh conservatives? Nice Joe, Fear the mosque? And then Mika, we are trying to demonize the Imam by spreading lies? This is beyond disappointing, not just because of his characterization of conservatives as harsh, but that we fear the mosque.

That kind of self righteous dribble, that we are an embarrassment, or right wing freaks, or raaaaaacists because we can’t see what you, the political elite, see just so well.We aren’t as open minded and accepting of diverse cultures as you, the political elites, that “bitter clinger” crap, drives me crazy. My guess is Joe was a harsh conservative until he started attending the smart parties in the Hamptons?

Look, here’s what I know. The Imam and his wife had been calling this the “Ground Zero Mosque” for months. Community center is the latest incarnation. Just the way the name was changed from the Cordoba Center (see your Iberian Caliphate History books for the meaning) to Muslim Community Center. As for bridge building, there’s been no attempt, none, until this controversy heated up. Now, its about building bridges.

And no, there is no fear. What those who oppose the mosque request is respect. Respect for Ground Zero, sensitivity to the many more 9-11 families who oppose this, and an understanding as to why they may not want a mosque built 360 feet from where terrorists flew two planes into the Twin Towers of commerce in the name of the Islam. That’s all. But fear no.

No, what we fear is a main stream media that ignores this Just for kicks … here’s the bite that says we are right wing freaks.

Daisy Kahn: The mosque will be built and by the way … you’re all Muslim haters

Daisy Kahn: The mosque will be built and by the way … you’re all...