I’m going to go out on a limb here and say Taryn Asher from Fox News Detroit doesn’t have a clue as to what she’s speaking about. Plus, the person who fed her the hot tip about 1,000 rounds of armor piercing, exploding ammunition being stolen out of a car doesn’t have a clue either.

From Fox News Detroit, with my emphasis.

Inside the 2013 Nissan Ultima was one thousand rounds of exploding ammunition. Both his daughter and her husband work for Air Force military police, and told police they drove in the boxes of ammo to do some training while they were in town.

Police treated this incident as a high priority; the massive amounts of explosive ammunition is said to be armor piercing. In a matter of hours police located the vehicle only three blocks away, but it was up on blocks. The wheels and rims were gone – and so was all of the ammunition.

First off, the stock photo used in the article and video below shows a pistol caliber standard hollow point round used by just about everyone in the United States for self-defense. Same in the video. Standard, personal protection rounds. 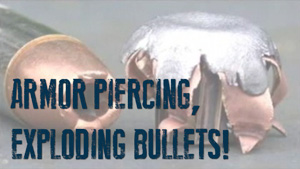 Next, 1,000 rounds is not a lot of ammunition. It’s certainly expensive – more than .60 cents per round these days – but it’s not a lot. One can easily shoot 1,000 rounds in a couple of training days.

Exploding ammunition? Come now … unless they were in possession of extremely expensive rifle ammunition, it wasn’t exploding or armor piercing. Was it possible they were in possession of high explosive incendiary/armor piercing ammo? Yes it is, but it’s so unlikely that I’m calling BS on this one. Just like saying someone used an “automatic” rifle during a crime. It’s so unlikely, your BS detection meter pegs at 100 when you hear it on the news.

Will there be a correction? Maybe, but don’t hold your breath. The news media is in the business to get people to watch their newscasts, not to deliver accurate news anymore. It’s all about the entertainment factor baby.

For those of you drinking the MSNBC Kool-Aid…

For those of you who keep saying “they are not going to take your guns...
Scroll to top