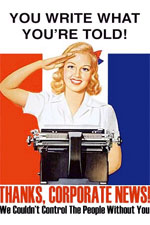 News staff from the CBS affiliate KTVA in Anchorage inadvertently left a message on the cell phone of Joe Miller’s campaign spokesperson yesterday. Nick McDermott, the KTVA assignment editor, had just ended a phone call with Miller’s spokesperson but missed the ‘end call’ button on his iPhone.

The conversation between McDermott, and those who are assumed to be other KTVA staff, goes on for about one minutes and 15 seconds. The audio and transcript are below. They seem to conspire to create stories that will harm the election efforts of Miller including looking for registered sex offenders and child molesters who happen to support Miller’s campaign. Then they suggest staging a Rand Paul-type moment where someone attacks Miller.

Not surprising to me. Remember, many journalism students join the profession to make a difference, not to report the news. When they realize they are not making a difference – in this case electing their preferred choice for Alaska’s next senator – they start making up the news.

Big Journalism had the breaking story, and Gov. Sarah Palin let the Fox News Sunday audience know about the story this morning during an interview with Chris Wallace. She called the conspirators “corrupt bastards” (video below) this morning and reminded Americans this is just one example of what it has been like for Joe Miller when the GOP establishment, Democrats, the Washington elites, and the left-wing media machine are all gunning for you.

FEMALE REPORTER: That’s up to you because you have the experience but that’s what I would do…I’d wait until you see who shows up because that indicates we already know something… [Laughter [INAUDIBLE]

FEMALE VOICE: You know that of all the people that will show up tonight, at least one of them will be a registered sex offender.[Laughter]

MALE REPORTER: We need to find that one person… [INAUDIBLE]

FEMALE REPORTER: The one thing we can do is ….we won’t know….we won’t know but if there is any sort of chaos whatsoever we can put out a twitter/facebook alert: saying what the… ‘Hey Joe Miller punched at rally.’

FEMALE REPORTER: That’s a good one.

Others will be writing today, and Ed Morrissey already has reached out to KTVA for comment, since they have now again made themselves the story.

Gateway Pundit brings us the video from Fox News Sunday this morning.

Note: I shouldn’t try to use words like impugn or imputing in headlines at all let alone on Sunday mornings, so I changed the headline to ‘discredit’.

UPDATE (Jim): Thought you might find Sarah Palin’s response to these reporters, or maybe it’s a response to the press in general? “Those are corrupt bastards, Chris.

She’s right of course. But are you really surprised?

For those of you drinking the MSNBC Kool-Aid…

Must see TV: Andrea Mitchell once again proving that she is thoroughly outclassed by John Sununu
8 replies

Juan Williams and Bill Kristol duke it out: 50 seats is a narrow victory.
Scroll to top