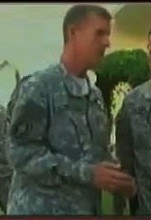 Why does this not surprise? The Army Times (via Big Journalism) has the details, and Rolling Stone has not responded, but … well read on.

The Army Times reports that both e-mails, and three separate sources, confirm that the comments made by junior staffers were supposed to be off the record. McChrystal, of course lost his job over this article in which he and his staff are said to have referred to Joe Biden as Vice President “Bite Me”, and that the President was not fully engaged in the Afghanistan War. But the kicker is, they were all junior grade.

Many of the quotes are drawn from banter among staffers that the article’s author, freelance writer Michael Hastings, overheard shortly after he joined McChrystal’s team when the general was on a speaking trip to Paris.

But although Hastings describes the personnel on the Paris trip as “the most powerful force shaping U.S. policy in Afghanistan,” the people he quoted in the article were mostly junior personnel who have no significant role in advising McChrystal, a source who was on the Paris trip told Army Times. “Almost all the offending quotes … were, in fact, from conversations with the most junior people on the trip,” the source said.

And not meant for attribution. The Army Times reports it still has not heard back from Rolling Stone, although in an interview weeks ago Hastings said everyone in the article knew what they said was on the record. I know the Army pretty well. I know that it is unlikely even a Specialist would make these kind of comments, even if they believed it. Sounds to me like AT is on to something

DOJ to Dead People … we’re not looking, go ahead and vote