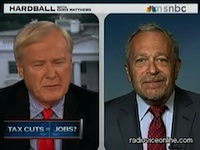 Ummmm. I’m not really sure what to say here. Is Chris suggesting that today’s CEOs should be jumping out of windows in shame for what he thinks they ‘ve done to the economy? Or, is he just getting misty eyed for the good old days? Help me out here my little mobsters.

The conversation between him and noted lefty, seniors will just have to die, economist Robert Reich, concerned the debt ceiling battle and the Republican refusal to raise taxes on the rich. Chris lays the blame of this current recession directly at the feet of the “wealthy” … who in Chris’ mind have sucked up all the cash out there and now just don’t want to share. Why, back in the good old days CEOs would never take these salaries … they would take the blame and … ummm … jump out the window to save family honor? Your patriotic duty.

Set aside the tragic nature of the aftermath of the 1929 crash when Wall Street executives saw personal and corporate fortunes destroyed, according to most reports of the era the suicides were mostly urban legend, not withstanding the desperation people felt as fortunes melted away in hours. I doubt they saw it as their patriotic duty, or an honor saving action to jump to their deaths.

As for today what a CEO earns has no impact on wages or even jobs for others, other than the jobs they provide. The left always seems to see wealth, instead of an ever changing and usually expanding base of capital, as just one big constant pot of money and the rich jumped in first and took it all leaving the rest of us just … change … and … hope?

Kinda makes you think of this one, heh?

What the debt negotiations aren’t
Scroll to top