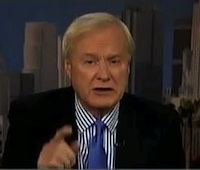 It’s really classic Chris Matthews and it comes in the form of his commentary that he runs at the end of the show. In this little gem of video Chris Matthews begs Barack Obama to go all out liberal, enact big programs, spend big money, tax the rich. Don’t hide who you are, because the alternative is Republican Armageddon.

I sat and watched him cheered and my little barbarians that you will to, because of the president takes Chris Matthew’s advice it will be a landslide win for Republicans next November.

Don’t believe me, believe  Former Bill Clinton advisor Mark Penn who says running on a campaign that divides the American people and promises nothing but more tax increases will ensure his defeat. Not a message Chris wanted to hear.

I wonder, is Mark Penn setting up Hillary for a challenge? Not likely but it is a delicious thought.

The first Monday in October