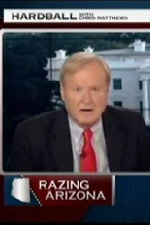 It is the last refuge of the losing liberal argument. Now I could say I don’t like the young President’s policies because they are bankrupting nation, tripling the deficit in his first year, cramming a taker over the best health care system in the world down our throats, and exerting more control over our lives in the name of energy and banking, not to mention running auto companies. I could, but since Chris Matthews already has it figured out … I’ll just let him speak. The conversation is with South Carolina Congress Bob Inglis.

But from a lefty’s perspective … I guess it must be race, you raaaaaaaacists. But then this is same guy who makes a point of noting he forgot the President is black.

Matthews to Wall Street: No money unless you can explain why you have it

Obama’s Aunt Zeituni to America: Give it to me

Obama is the best thing to ever happen to … libertarianism?
13 replies