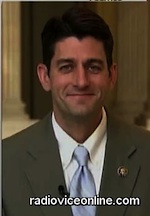 This is a perfect example of why, when a Congressman knows his stuff, he can handle even the dumbest questions. Matthews demands, name one item you will cut from the budget. Ryan, I’ll name more than one. Here we go.

There’s so much in this one sound bite that it’s hard to just headline one aspect. Matthews tries to nail Republicans as hypocrites for “bitching” about the deficit, but unwilling to pose a plan. Congressman Paul Ryan, of course, has had an alternative budget for more than a year which Matthews should have know, but then again, Matthews, at the end of the interview,had to check his notes to remember what state Ryan represented. In the lefty world some people are foreigners, like Ryan.

BONUS VIDEO: Here’s a clip toward the end of the video where Ryan schools the spitter on the American tax system and why raising taxes on the upper bracket hurts small business. It’s a shame, but then again, why would Matthews know.

Sorry Kate, but I had to do it.

Debt, deficit…what would Canada do?

Matthews to Michael Steele: Were you afraid Republican white guys were scared of you?

Wikileaks to the US Military: Hey! We need your help to rat on your friends
Scroll to top