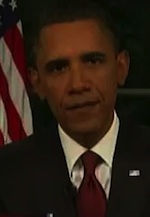 Horrifying! TOTUS has been there for this guy at some of his worse moments, and yet he has hung in there. Trip on a syllable, no problem. TOTUS kept rolling. Stumble on an market economy point you never quite understood, TOTUS did. Now Matthews wants him gone. Oh the humanity.

From last night’s Hardball, with a big hat tip to Ed at Hot Air. We cut it from the show we record so you could have a little more to digest, including a kinda crazy answer from Time Magazine.

To set the context , Matthews is asking his guests to comment on what he considered a very dry speech from the One, on Tuesday night. “It could have been written and delivered by any President”. It concludes with Matthews “dump TOTUS”. Chills.

I think it’s time for a rerun, don’t you?

Government will spend whatever the tax system will raise (more like double&...