New Haven police may have an issue on their hands. It’s important to note all of the facts have yet to be presented to us, but at first read, it looks like someone was arrested for doing something he was legally permitted to do.

We’re not going to discuss people who freak out at the sign of a person carrying a gun, that’s not what this is about but it does look like a few people saw this man’s holster and/or gun, freaked out in the movie theater and called the cops. Did they leave the premises? Did they tell other people to leave? Nope, looks like they just called the cops, and New Haven PD responded in force.

New Haven Police apprehended a man who brought a loaded handgun into a movie theater during a showing of “The Dark Knight Rises” on Tuesday night.

[The accused], of New Haven, was arrested and charged with breach of peace and interfering with police after it was discovered he brought a loaded hand gun into the theater.

According to police, an usher said at least three patrons inside the theater saw that Hwang had a holster with a gun in it and alerted theater staff who then called police.

Police entered Theater 1 and asked the patrons to raise their hands and file out of the theater. As they exited, they were patted down and escorted outside.

The officers identified Hwang as the suspect, drew their weapons and ordered him to put his hands up. According to police, Hwang remained in his seat using his cell phone.

My guess is that he may have been calling his lawyer. I’m not sure about the interfering with police charge, but the accused can not be charged with breach of peace for doing something he is legally able to do.

This entire case should be thrown out immediately.

(I did not list this man’s name simply because the NHPD may have broken the law providing information that indicated this man had a Connecticut Pistol Permit. That list is private in Connecticut and the public does not have access to it.)

Important previous post – copy and pasted in its entirety –  for the New Haven police and prosecutors. Yes, you can open carry a pistol in Connecticut – From Sept. 3, 2010.

And you can responsibly carry a pistol in a bar that serves alcohol, and you can even carry your firearm on college campuses. I thought most of the misconceptions concerning Connecticut state law when it comes to permits and carrying handguns had been squashed, yet some continue to put totally false garbage out there.

I’m not going to speak to any specific case in Connecticut, but I am going to briefly review the completely false comments made here on this blog by “Army Strong” over at this post. 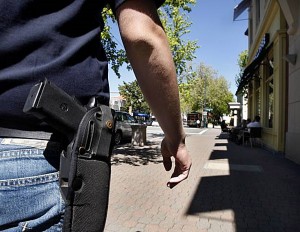 Ongoing Myth: Connecticut law requires handguns be concealed, and furthermore your gun can not be able to “print” and let people know you are carrying a firearm.

Totally false. Connecticut permits are defined as a State Permit to Carry Pistols and Revolvers. There is absolutely no reference to any law concerning concealment or where you can carry on the permit itself. Note, you must have a state permit to carry openly or concealed in Connecticut.

How can I prove this? Well, it’s difficult to prove a negative since laws do not point out what you can do, but there isno statute requiring concealment. That said, the Connecticut Board of Firearms Examiners has posted answers to questions submitted on its website. The answers were provided by Veronica Rose, principal analyst at the Office of Legislative Research. This following is not submitted as legal advice.

The answer is no. The law does not address this issue. But, with limited exceptions, it is illegal to carry a handgun, whether concealed or openly, without a permit, except in one’s home or place of business CGS § 29-35(a).

Even the Hartford Courant posted an article in April 2010 noting it was completely legal to open carry in Connecticut.

A state Superior Court judge dismissed the breach of peace charge police ultimately filed against Goldberg, forcing law enforcement experts to concede that, absent extenuating circumstances, there is nothing in Connecticut law to prohibit licensed gun owners from conducting their lives visibly armed.

Ongoing Myth: You can not carry a handgun in an establishment that serves alcohol.

Totally false. Again, from the same list of questions and answers provided by the Office of Legislative Research.

Is the carrying of a handgun on premises with a posted sign banning firearms critical to a permit revocation decision?

In other words, the direct answer to the question is no, there is no law stating you can not carry in a bar. That said, Connecticut State law is clear that you can not be intoxicated – defined as a blood alcohol level of .10 or higher – while carrying a firearm. This is specified in CGS §53-206d and if convicted, it’s a class A misdemeanor.

Ongoing Myth: You are very limited as to where you can carry a firearm. 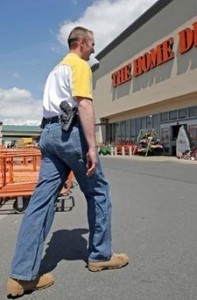 All in all, we don’t have it too bad in Connecticut. There are specific areas where you can not carry, and they are spelled out in legislation. It should be noted there are some towns – including New Britain and New London – who have town ordinances that ban you from carrying concealed, yet interestingly they do not ban open carry, which again is legal in Connecticut.

You can not carry in or on the real property comprising a public or private elementary or secondary school, or at a school sponsored activity. (CGS §53a-217b) Note that public and private colleges and universities are not mentioned.

Although I can not site the statutes, (sorry) I believe it is also against the law to carry within the State Capital or where the General Assembly is meeting or at a legislative public hearing. I’m not sure about state forests either. There may be other town or city ordinances concerning carrying in parks.

Ongoing Myth: You will be charged with breach of peace if you carry openly in Connecticut.

It’s certainly true law enforcement can charge you with breach of peace, but that certainly does not mean you are guilty of it. As a matter of fact, the breach law in Connecticut is very clear and I went into detail about the subject in a Feb. 2008 post. An excerpt…

Here is the class B misdemeanor version (Connecticut statutes):

With reference to the above, can someone let me know where inadvertently exposing your pistol [or open carry] would cause a breach of peace?

All breach charges in Connecticut that I know of were thrown out of court. You can also read the statutes for creating a public disturbance CGS §53a-181a, and disorderly conduct CGS §53a-182 and you will not find any reference to open carry. Again, I’m not a lawyer and I’m not going to go into specific cases.

You can find additional information about this subject around the net, including the Connecticut Citizen Defense League website and the Connecticut section of the OpenCarry.org forums. Add your references in the comments section below.

This post deals almost exclusively content concerning carrying pistols. If you found it interesting and want to learn more, check out my post concerning the feel good Connecticut assault weapons ban that is totally irrational.

Chic-Fil-A bully gets fired/quits. Victory for the working class