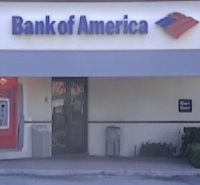 Let me just apologize right out of the gate for how much I truly love this story. It’s been no secret, it’s been well-publicized, on how banks have had a problem handling their long list of foreclosures. But when the bank forecloses on a home on which not only doesn’t it hold a mortgage, but there is no mortgage to foreclose on, well now America’s banking industry has hit a new low. Read on my little mobsters.

So, she and her husband instead sued Bank of America to stop the foreclosure action. Surprisingly not only did a couple when, but the judge awarded them $2534 in court costs. But after six months the bank still had not paid the settlement. So the couple’s attorney did what any good attorney would do, he foreclosed on the bank.

So, how did it end with bank being foreclosed on?  After more than 5 months of the judge’s ruling, the bank still hadn’t paid the legal fees, and the homeowner’s attorney did exactly what the bank tried to do to the homeowners. He seized the bank’s assets.

“They’ve ignored our calls, ignored our letters, legally this is the next step to get my clients compensated, ” attorney Todd Allen told CBS.

Sheriff’s deputies, movers, and the Nyergers’ attorney went to the bank and foreclosed on it. The attorney gave instructions to to remove desks, computers, copiers, filing cabinets and any cash in the teller’s drawers.

After about an hour of being locked out of the bank, the bank manager handed the attorney a check for the legal fees.

“As a foreclosure defense attorney this is sweet justice” says Allen.

Allen says this is something that he sees often in court, banks making errors because they didn’t investigate the foreclosure and it becomes a lengthy and expensive battle for the homeowner.

Here is a link to another story with a little more detail. And here is the CBS TV station’s report on this.

Connecticut’s smoke and mirrors budget and other liberal wish lists