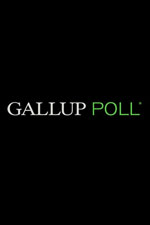 I think this is significant since it gives promise to our demands for a smaller and leaner government, especially at the federal level. Only 42 percent of random adults think the federal government should be involved with health care.

This is not a poll including registered likely voters who are generally considered to be better informed when it comes to domestic policy. If you limited the results to registered likely voters, what do you think would happen to the 42 percent figure? What about the 56 percent who do not think it’s the federal government’s responsibility? From Gallup.

Americans’ attitudes toward the government’s role in ensuring all Americans have access to affordable healthcare have changed substantially over the past decade. These changes began before the Affordable Care Act was passed in 2010, and concurrently with the financial crisis of 2008 and Obama’s first presidential campaign and election. Although Democrats are now somewhat more likely compared with 2000 to say the government should stay away from healthcare, much of the shift in attitudes against government intervention has stemmed from changes among Republicans and independents. 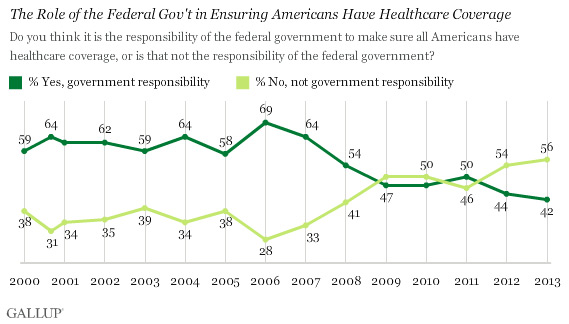 Results like these warms the heart of people who are involved in 10th Amendment advocacy groups. The federal government’s role is clearly defined in the United States Constitution and nowhere does it mention health care. Liberals and statists always point to the ‘general welfare’ clause and the ‘commerce’ clause, but their logic means the federal government has the right to be involved with every aspect of our lives as a central governing body for everything. Period.

That was not the intent when this great country was founded. The states are the true holder of power here in America, and we must drive to strip power from the federal government bureaucracy and congress-critters and return decisions back to state legislatures and the people. Period.

What about the trend? Gallup notes the peak for those who did think it was the federal government’s responsibility to “make sure all Americans have health care coverage” was in Nov. 2006 when it reached 69 percent. That’s a big number, but the trend may soon be completely reversed, since as of Nov. 10 this year, it’s down to 42 percent.

Imagine what that number would be if it only included registered likely voters.

Were unemployment numbers faked prior to 2012 Obama election?
Scroll to top