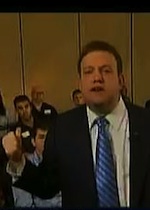 and when it’s over at least half of America is gunna be pretty angry. So said pollster Frank Luntz last night on Sean Hannity’s show on Fox. Luntz’s live focus groups are always pretty fun, but this one sets a new standard that will be hard to top … or will it? This is well worth the watch. It’s only two minutes, but its 120 seconds of fun, fun, fun as people in Florida got at it on Obama, Pelosi, the Republicans and whether orange juice really does deliver vitamin C. OK, not the last part, but everything else is on the table.

Just to set this clip up, Luntz, the most entertaining pollster in America, asks his group if they are disappointed in Obama and the Democrat’s performance and, well, it’s off to the races. I wish I could pull out the teaser bite, but it’s really a lot of shouting, at each other but it’s demonstrative of what’s going on. The kicker line is at the end by Luntz, but the catalyst is all Mr Uniter himself. Change!

One hell of an election indeed.

Congressman Grayson: You want dirty … I’ll give you dirty –...