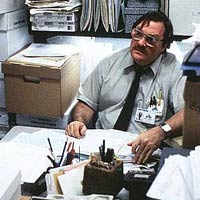 Goodness grief. What do you even say to something like this. If they make any sort of offer, what makes the city think the OWS crowd in Lost Angeles would not come back and demand more free stuff? And really … Office Space?

From the LA Times, with a hat tip to Phineas at Sister Toldjah.

Los Angeles officials have offered Occupy L.A. protesters a package of incentives that includes downtown office space and farmland in an attempt to persuade them to abandon their camp outside of City Hall, according to several demonstrators who have been in negotiations with the city.

… city officials have offered protesters a $1-a-year lease on a 10,000-square-foot office space near City Hall. He said officials also promised land elsewhere for protesters who wish to farm, as well as additional housing for the contingent of homeless people who joined the camp.

They may start to eat their young…

The proposals were received with a mix of excitement, anger and disbelief among protesters, many of whom did not know that members of the camp were in negotiations with city officials.

“I don’t appreciate people appointing themselves to represent me, to represent us,” one woman called out during the assembly. “Who was in those meetings?”

Learning a lesson? Some of the OWS protesters in Lost Angeles are simply out for the glory and free stuff.

The city should also make note of the protesters who are not at all happy some of their crowd is out to back-stab them. Those who are not involved with negotiations will not depart the camp even if a deal is done. The city has to know that right?

Probably not. Maybe they can sweeten the deal with a couple of red, Swingline staplers.

Breaking Russia – How dare the United States defend itself!
Scroll to top