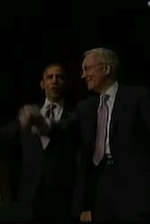 Somehow, there are days I see the administration not as a collection of evil master-minds, but the gang who couldn’t shoot straight or the extended family of Daffy Duck.

For example, we have Valerie Jarret, stepping into the nature v. nurture argument with regard to homosexuality while commenting on the recent rash of suicides of gay youths, discussing their “lifestyle choice.”

While we’re on the subject of stepping into the messes, here is the President himself, talking down to the one constituency that whole-heartedly supports him.

Speaking of Barney, those are the only words he’s had to eat lately…

Harry Reid, not to be left out of the fun, has been caught talking out of both sides of his mouth… while San Fran Nan, the Frisco Flyer, has been playing on both coasts of the country on our nickel.

Breath-taking cynicism on the part of the Department of Justice and the administrations, who want to overturn “Don’t Ask, Don’t Tell,” just not right before an election…

Frankly, I’d almost think this was a re-make of “Duck Soup,” except that Rufus T. Firefly looks like Disraeli compared to these rubes.  I mean, hey, at least that bunch of Marxists could follow a script.

Matthews: The thrill is gone

The Larger Implications of the Global Economic Malaise…
Scroll to top