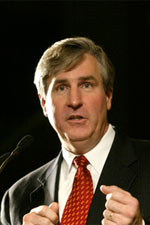 New Jersey Education Commissioner Bret Schundler has been relieved of his duties. Gov. Chris Christie (R-N.J.) made it a point to note Schundler provided the correct budget figures at a “Race to the Top” presentation in Washington D.C. Did anyone have a camera focused on Schundler when Christie made that claim?

If not, he must have gotten awful quiet wherever he was if he knew the presentation was being video taped.

From the Daily Record, with a hat tip to Hot Air.

Schundler was let go by Christie this morning following the release of a video by the federal Department of Education that contradicted Schundler’s assertion that he provided federal Race to the Top grant application reviewers with correct state aid numbers after an error in the documents was revealed.

“I was extremely disappointed to learn that the videotape of the Race to the Top presentation was not consistent with the information provided to me by the New Jersey Department of Education and which I then conveyed to the people of New Jersey. As a result, I ordered an end to Bret Schundler’s service as New Jersey’s Education Commissioner and as a member of my administration,” Christie said in a statement issued at 12:30 p.m. today.

Yeah, it’s pretty bad to make a $400 million mistake, but it’s even worse trying to cover it up.

The video is provided by NJ.com. The DOE panelist asks – at the end of the clip – “Did you have any luck with the financial [data] …” and the answer was “No..” but nobody from the DOE indicated it was that big of an issue at the time, or suggested it would be a problem.

I guess after completing a 1,000 page application and answering hours of questions, maybe they just wanted to go home?

Is this how we really want our government to operate? Sending state leaders to Washington D.C. to beg for money after completing 1,000 page applications?

Bret D. Schundler (born January 14, 1959 in Colonia, New Jersey) is an American politician from New Jersey. He served in the Cabinet of Governor Chris Christie as New Jersey Commissioner of Education until he was dismissed on August 27, 2010.

Cato: The reality of money and jobs in public education

So, what does Obama think of Chicago’s school voucher proposal?

Democrat in N.J. wants kids to cough up $10 registration fee for bikes
12 replies

Advance GDP estimate for second quarter revised down from 2.4% to 1.6%