Sounds like an environmentalist’s worst nightmare does it not? I’m not talking about the entire expanse of the Everglades mind you, just a 500 acre section that’s already near a natural gas energy plant. 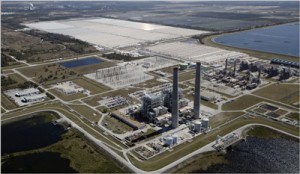 There have been plenty of articles about windmills off the coast of Massachusetts blocked by families like the Kennedy’s, but would you think the New York Times would completely ignore the environmental impact of installing these solar mirrors, especially when their first sentence mentions swamplands, otters and wild hogs?

In former swamplands teeming with otters and wild hogs, one of the nation’s biggest utilities is running an experiment in the future of renewable power.

Hat tip to Steve Gilbert at Sweetness & Light, who noted the irony.

Notice how The Times buries the minor detail that solar energy does not produce any meaningful contribution to the nation’s power supply. Nor is it likely to, anytime in the foreseeable future.

(Indeed, the author cannot even bring himself to cite the minuscule figures for solar power, which are less than a percent of a percent.)

But more importantly, notice the blatant hypocrisy on display here.

If these 500 (plus) acres of Florida “swamplands teeming with otters and wild hogs” were being covered by anything than a solar power plant the New York Times would be screaming bloody murder.

In fact, these acres would be called ‘wetlands’ and not ‘swamplands.’ And we would hear endlessly about how vital they are to Florida’s eco-system.

Another solar company crashes into the sun – Solar Trust of America

Thousands of Golden Eagles in Danger, Due to Wind Farms