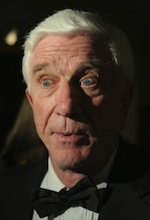 What can I say? One of the funniest men in the movies, he had the dead pan comedy down to a science that has been imitated but never duplicated. From The Virginian to Airplane, he played everything with the same intensity, never cheating an audience out of a buck just to make a buck. I’ve included a best of video below. Enjoy, laugh out loud and say a prayer. God bless and God rest.

Wagon Train, Peyton Place, even Walt Disney’s Wonderful World of Color, Nielsen made his mark in television across every imaginable genre. Here’s a long list of credits at IMBD. But it’s clearly his two spoofs, Naked Gun, and Airplane, where I think most audiences believe he really hit his stride. Here’s a list from IMBD. It will take you a while to go through these credits.

Here’s some of his best moments from those two movies:

An amazing career. From the LA Times.

Leslie Nielsen, a serious actor who became a comic star with his career-changing roles in “Airplane!” and the “Naked Gun” comedies, died Sunday in Fort Lauderdale, Fla. He was 84.

Nielson died of complications from pneumonia at a hospital near his home, surrounded by his wife, Barbaree, and friends, his agent, John S. Kelly, said in a statement.

Just how preposterous was it?

As the crew and passengers became ill, Nielsen said they needed to get the sick to a hospital.

“A hospital? What is it?” a flight attendant asked.

Nielsen: “It’s a big building with patients, but that’s not important right now.”

And when Nielsen was told, “Surely you can’t be serious,” he answered: “I am serious, and don’t call me Shirley.”

Nielsen followed up “Airplane!” with another goofy role delivered with deadpan conviction as Frank Drebin in the “Police Squad!” television show and “Naked Gun” movies.

It was quite a career shift for an actor who seemed perfectly cast as a handsome leading man when he came to Hollywood in the 1950s, already a veteran of live television appearances.

A typically serious early role was as the spaceship commander in “Forbidden Planet, ” the 1956 science-fiction classic. “It’s the reason I was never asked to do ‘Star Trek’ or ‘Twilight Zone’ for TV,” he told the Toronto Star in 2002. “I carried too much baggage with me from that movie.”

Remember how they ‘split’ ownership of GM after bankruptcy?