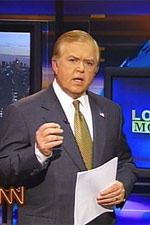 We’ve got mail! Actually, we get a lot of mail, but anyway… Kevin from Manchester, Conn. sent us a aloof e-mail suggestion we would not discuss this story since it was posted on a liberal website. The Nation – a left-wing liberal online magazine – has charged Lou Dobbs is an “American hypocrite” since he has “relied for years on undocumented labor for the upkeep of his” various properties. But … there is always a but.

I’m not sure why Kevin thinks we would not talk about this. It’s not like we have not written about the Nicky Diaz story out of California. Maybe Kevin does not count the Diaz story since we totally crushed it? Well, we’re on to crush this one next! 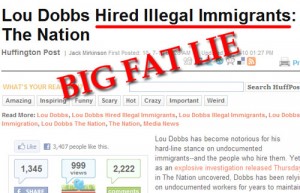 The Huffington Post referred to the investigative report by The Nation using the catchy headline: Lou Dobbs Hired Illegal Immigrants. The problem is the original article, written by Isabel Macdonald, does not even come close to proving Dobbs hired any illegal aliens. I’ll go as far as suggesting it does not even imply he hired illegals. To avoid burying the lede, every self-described illegal alien interviewed by Macdonald worked for a company contracted by The Dobbs Group.

Got that? Macdonald spent an entire year investigating this story and spoke to five illegals. I guaranty you Macdonald’s investigation went on and on in an attempt to find one illegal worker – any illegal worker – who was actually hired by Dobbs and paid directly by Dobbs.  They found nobody, so therefore they run with the story that has no legs, and the Huffington Post twists the story to state Dobbs “hired illegals.” Totally false.

Let’s use an analogy shall we?

I bought a new house a few years ago … the lot and construction was managed by a builder, who in turn hired contractors and some of them in turn hired sub-contractors. During the five months of construction, my guess is there were more than 40 people who worked on the house. Framers, roofers, electricians, sheetrockers, painters, plumbers…

Am I responsible to ensure every one of them was legally working in the USA? No, the builder, contractors and sub-contractors are responsible. I’m quite certain I could not even legally find out if they were all legal.

It certainly may be true that companies hired by Dobbs went out and hired illegal aliens, but that’s a far stretch from stating Dobbs hired illegals like the HuffPost claims. Now, let’s go through the examples Macdonald uses detailing how “Dobbs” relied for years on illegal aliens.

A 36-year-old Mexican immigrant I’ll call Marco Salinas was working with a group of horses in a stable at the bustling Wellington Winter Equestrian Festival when I approached him for an interview. (Fearing deportation or job loss, Salinas, like the other workers interviewed for this story, asked that neither his real name nor the name of his employer be used.)

Got that? “Marco” specifically did not want his employer’s name used. He works for someone other than Dobbs. Dobbs may have hired that someone, or maybe someone else who eventually hired Marco.

When Gomez worked for the Vermont-based stable contracted by Lou Dobbs, his wages were $500 per week, and he typically worked sixty-five hours, meaning he was earning only slightly above minimum wage.

So Gomez worked for the stable contracted by Dobbs.

Speaking with The Nation in a Mexican restaurant where Univision blared in the background, Ortega, who had worked for a Florida company contracted by Dobbs to do garden maintenance on his West Palm Beach property, described himself as “an immigrant who doesn’t have papers.”

Ahh yes, someone else who works for a company contracted by Dobbs.

In a telephone interview, Jorge Garcia, a 24-year-old Guatemalan immigrant who worked for seven years at the same landscaping company, said that he and his brother had also regularly worked on Dobbs’s property.

Yup, Garcia is another illegal alien hired by a landscaping company. Are we seeing a pattern here? Eventually, Mcdonald names and speaks with the companies who were hired by Dobbs – and many other people – not owned by Dobbs.

I asked Mike Sedlak, the owner of Sedlak Landscaping, the contractor that maintains the grounds on Dobbs’s West Palm Beach property, whether Dobbs has ever inquired about the status of his employees. Sedlak said only, “I don’t feel comfortable talking about it,” and quickly got off the phone.

I also asked Missy Clark, the owner of North Run Farm, the stable in Warren, Vermont, where the Dobbs Group horses are housed, whether Dobbs or his daughter had ever inquired about the immigration status of the workers caring for Hillary’s horses. She said, “They’re very well aware that the people taking care of the horses are 100 percent legal,” and said she’d given the Dobbs family assurances to that effect. But she later described her difficulty obtaining work visas for many of her employees. “It was a big process and a total pain in the neck,” she said. “I had been working on it for years.”

During Dobbs’ radio show today, he  interviewed Mcdonald. Mcdonald is clear, she’s trying to be an activist instead of a journalist. She says she wants people to know the truth, and the original story is somewhat truthful since Mcdonald never states – like HuffPost does – Dobbs hired illegal aliens. But the article is a totally biased hit piece since just about anyone in the USA could be hit with these types of allegations.

Dobbs, who called the story a “fairly typical hit piece, a smear piece,” interviewed the reporter behind the story, Isabel Macdonald, on the radio show. He repeatedly asked Macdonald if he or his company had ever hired illegal immigrants.

Macdonald eventually allowed that Dobbs and his company had not – but she said that his contractors had done so. She pressed Dobbs on why he had not checked the status of the workers.

Dobbs, who was calm throughout the interview, responded that he does not have the standing to check the status of anyone – and said Macdonald sounded like a “nativist” for asking him to do so. He insisted that he wanted to have a friendly conversation with Macdonald despite her “outrageous claims,” and said she was trying to “deflect and avoid” his questions.

The two discussed the details of the article, and Macdonald indicated that she believed Dobbs was trying to distract from the main point of the piece, which is titled “Lou Dobbs, American Hypocrite” – that Dobbs employed (albeit indirectly) illegal immigrants even as he railed against them publicly.

“You have actually contradicted not one single claim that was made in that article,” Macdonald said, adding: “Your listeners deserve to know the truth.”

This type of I caught you game is quite stupid. It’s to the point where if you are a regular American guy or gal and you’re unable to pay the mortgage for two months during a rough period, get pulled over 20 years prior for a DUI, drop out of one college and go home for a couple of semesters before returning, or fall behind on your student loan payments you are automatically the most evil person in the world who should never be entrusted as a politician, local community leader, or conservative talk show host.

How many of you could live up to the standards? If you think you can … you best inquire and demand proof concerning immigration status of every employee who works for your favorite restaurant, automobile service center and landscaper you’ve ever done business with.

Are conservatives burnt-out after health care and recent TEA Parties?

Redux – the economics of the minimum wage – McMahon vs Blumenthal...