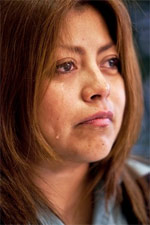 If you’re looking for further proof Gloria Allred is flat out using Nicky Diaz Santillan as a political prop, all you have to do is look at the new lawsuit filed. Allred has exposed her client to felony charges and deportation to simply sue Meg Whitman for $6,210 in back wages and mileage reimbursement. You can’t make this stuff up I tell ya.

Diaz Santillan is being taken for a ride and used as a political ad campaign against Meg Whitman by Gloria Allred. Allred has absolutely no concern for her “client.” I’m wondering at what point will Diaz Santillan realize this, disassociate herself with Allred, and attempt to quietly blend in with the other illegal aliens in the country.

On the other hand, Allred probably pointing to the Aunt Zeituni case in Boston and told her there would be no way Immigration and Customs Enforcement would throw her out of the country as soon as she became a well-known housekeeper who was abused by a rich white woman … who failed to pay her a mileage reimbursement or send her a card when she had a baby.

Or maybe Diaz Santillan figured this out on her own and wants to be an activist. It really doesn’t matter, she’s a criminal and maybe she’ll be able to use that $6,210 for a first class ticket back home.

Assuming this is a legitimate claim by the housekeeper (and I have no idea), shame on Gloria if she did not FIRST go to Meg Whitman to see if the matter could be resolved quickly for her client – rather than that staged press conference. That is what lawyers should do. That is what is in the BEST INTERESTS of the client.

Imagine this: it is possible (if the claim is legitimate) that Meg Whitman would have paid it (which is what the housekeeper is said to want) and then Gloria would not put up that now national “neon sign” that her client is 1/ illegally in this country and 2/ submitted a false social security number (fraud.)

Everyone would have won.

Greta is being way too kind thinking Allred is not doing this to earn political points. Every move indicates this is an uncoordinated attack on the Whitman campaign. Just because Allred is not coordinating with the Democrat candidate for governor, does not mean this kerfuffle is not politically motivated. (How’s that for a triple-negative.)

Others writing include Gateway Pundit, who has a second post with video from Greta’s show last night.

California is in the news again…

Quote of the week: “It is reprehensible that anyone would use taxpayer money for anything other than its intended purpose”

Link Salad – All Obama, all the time…
Scroll to top