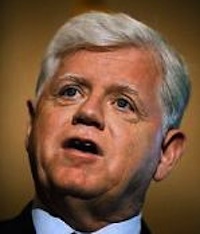 We told you Friday we thought it a bit unusual that Congressman John Larson (D,1, CT) chose to hold his “mediscare” town hall meeting at a Newington senior center. Ostensibly the meeting was to set up to fill seniors in on Republican Congressman Paul Ryan’s proposed changes to Medicare. Set aside the fact Ryan’s changes are designed to save Medicare which will be broke in just a decade, but not a single senior will be affected by Paul Ryan’s program (no one over 54 will be affected by proposed changes to Medicare). Attendees apparently were less than impressed and the questions less than friendly.

Jim,
We rocked him for two hours.  He came in very partisan, placing blame for all things wrong with the economy at the feet of GWB and the Republicans.  Would not recognize the unsustainability of Medicare.  Plenty of class warfare against the rich – disgusting.  We interrupted him, corrected him and motivated plenty of seniors to chime in early.  His straight-faced solution for Medicare is eliminate fraud/waste, contain costs, and go back to the Clinton tax rates.  Most of the questions were critical.  There were even a group of LaRouche people giving him hell about the bailouts.  He didn’t expect it going in, but he got an earful.  He can be nasty, we’ve seen it before – he raises his voice dictatorial style – Mussolini would be proud – ha!  Hopefully he’ll re-tool for the next one cause from his team’s perspective this had to be a disaster.  We took video and that should circulate over the weekend.

That’s always a good one … blame Bush. This isn’t so devastating since Larson lives in a rock solid D district. But it does give you a good idea of how Dems intend to demonize Ryan’s plan. Scare the seniors (who will NOT be affected), blame Bush(never gets old, heh?), and then keep driving the country toward the cliff.

Palin rides with the “hogs” into DC … Matthews asks “Who...
Scroll to top