Future funding of state and local employee pension plans is a complex subject. It’s not a sexy story, and I really don’t think people want to worry about stuff that will happen next week let alone a decade or two down the road. That said, one academic study out of Northwestern University suggests huge tax increases need to start now to ensure funding for future liabilities.

Take these number for what they are … financial estimates that look 30 years into the future. But let’s say this study over-emphasizes the problem by 100 percent – doubling the problem. How does this sound?

U.S. state and local governments will need to raise taxes by $1,398 per household every year for the next 30 years if they are to fully fund their pension systems, a study released on Wednesday said.

Again, even if the problem is half what is described, how does $700 in local and state tax increases every year for 30 years sound just to fund pension liabilities? What’s your take on the subject? If you have a background understanding this stuff, please do chime in below in the comments section.

The full academic report – written by Robert Novy-Marx from the University of Chicago and Joshua D. Rauh from the Kellogg School of Management can be downloaded here.

State pension plans are underfunded by $3.2 trillion when misguided accounting practices are corrected according to research by Joshua D. Rauh, an associate professor of finance at the Kellogg School of Management, and Robert Novy-Marx at the University of Chicago, published in the Journal of Economic Perspectives. Furthermore, because pension funds are highly exposed to market risks, there is only a 5 percent chance that they will perform well enough to meet the needs of retirees in fifteen years.

State governments in the United States had approximately $2 trillion set aside in pension funds and $3 trillion of “stated” pension liabilities in December 2008. By this measure, the funds seemed to be short nearly $1 trillion. But according to Rauh and Novy-Marx, the shortfall is more than three times larger, at $3.2 trillion. The lower estimate, they say, is the result of government accounting standards that require states to apply accounting procedures that severely understate their defined-benefit pension plan liabilities.

Rauh’s discussed their paper in a blog post he wrote in March, with my emphasis in bold.

This analysis raises the question of how soon such a situation might lead to an all-out state and municipal fiscal crisis. One important day of reckoning is the day that the state pension funds run out of money. At that point, pension payments to retirees will have to come out of general revenues. This day of reckoning is in fact not as far away as some might imagine. For Illinois, it could be as soon as 2018.

For Connecticut, this date would be sometime in 2018. Note Rauh and Novy-Marx assume an 8 percent return on the invested pension dollars, and we can assume their study is not “corrected” to reflect the new Connecticut tax increases or undetermined – if any – union “concessions.” (Not all states are listed, click here to see the full table in the post.) 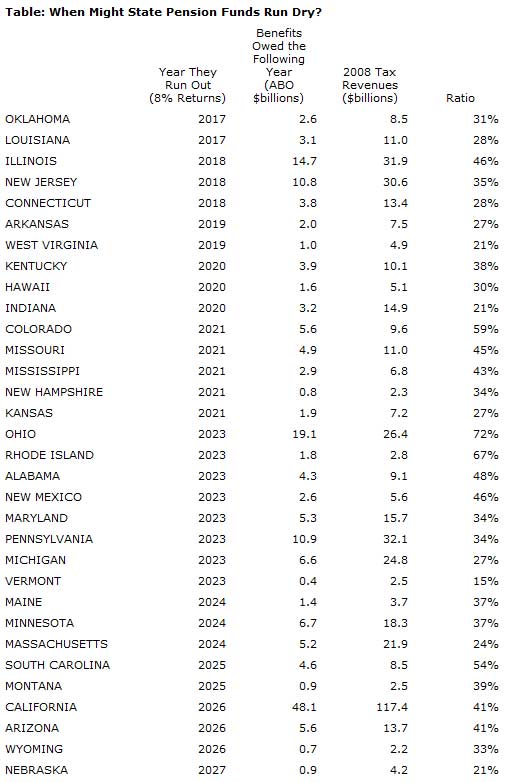 Government employees, think about this…

Senator Kerry: do as I say, not as I do
4 replies