Scroll to the bottom of this post for relevant updates and NPR stories on this subject from Nov. 2008.

A seemingly grassroots organization that’s mounted an online campaign to counter the tea party movement is actually the front end of an elaborate scheme that funnels funds — including sizable labor union contributions — through the offices of a prominent Democratic party lawyer.

A Web site popped up in January dedicated to preventing the tea party’s “radical” and “dangerous” ideas from “gaining legislative traction,” targeting GOP candidates in Illinois for the firing squad.

“This movement is a fad,” proclaims TheTeaPartyIsOver.org, which was established by the American Public Policy Center (APPC), a D.C.-based campaign shop that few people have ever heard of.

But a close look reveals the APPC’s place in a complex network of money flowing from the mountainous coffers of the country’s biggest labor unions into political slush funds for Democratic activists. 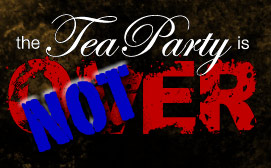 The article – worth the full read – goes on to specify how the money flows from labor unions through a series of 527 groups and finally distributed around the country to finance advertising and pay salaries for liberal activists. They also funded the Web site theteapartyisover.org.

All of the funding distribution is legal, but it provides an easy way for union leaders to use member dues to finance fake grass roots efforts around the country.

Two of the 527 groups, the Patriot Majority and Patriot Majority West, provided a good amount of funding for the other group that created the anti-TEA Party site. Those groups – in turn – were funded by some very well know country-wide unions including…

[the] Service Employees International Union, Change to Win, the Communications Workers of America, the National Education Association, the Teamsters Union, the United Food & Commercial Workers Union and others besides.

It’s clear a tremendous amount of money flows from union dues into organizations like Patriot Majority and Patriot Majority West. God knows how many people make huge salaries in Washington D.C. and beyond in this monstrous shell game.

And here I thought McCain/Fiengold was supposed to get the money out of politics. It’s just another symptom of the disease readers.

So what have we learned? The lefties are big into astroturfing, all the while pointing at the TEA Party movement saying it’s fake and pure astroturfing. Talk about projection.

It’s important to note this probably also happens at the federal level on the Republican side as well, but the left’s claim about the TEA Party movement is completely wrong. 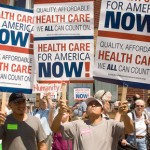 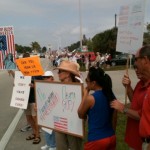 Kudos to Fox News for doing some actual investigative journalism.

Though, to be fair, some of this information was first uncovered by various conservative bloggers.

Steve’s comments at Sweetness & Light resulted in a simple Web search on “Patriot Majority” and I found a couple of NPR pieces from 2008. Maybe we should all be watching news from NPR more frequently?

Prior to the Nov. 2008 election, NPR dug into union funding as well.

Patriot Majority, running ads against Dole, Wicker and Sen. Saxby Chambliss (R-GA), just reported a $1.65 million haul from AFSCME, in addition to $1.5 million from the union earlier in the month, not to mention even more before October.

Will Evans at NPR did a specific piece concerning Patriot Majority on Sept. 8, 2008. Do read the full post by Evans.

Patriot Majority is one in a network of 527 organizations run by veteran political consultant Craig Varoga in order to help Democrats in Senate, House and gubernatorial races this year.

Update 2: Ed Morrissey at Hot Air also picked up on the Fox News story. I’m sending him a note concerning the NPR stories from 2008.