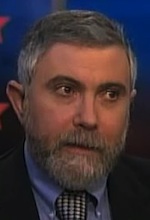 Well, it’s not like we didn’t tell you this was where the left was headed. On This Week’s roundtable, the discussion was serious ways to cut the deficit and the debt. It didn’t take Dr Krugman long to get to the heart of the matter … so to speak.

This bite starts with Ruth Marcus making the case that most people don’t take the debt seriously. She points out that most people are willing to cut everything except “their stuff”. Right on, says Nobel Prize winning economist Paul Krugman, adding, now can we have a serious discussion about death panels and a VAT tax?

As we have pointed out before using the term Death Panel (actual term is Independent Payment Advisory Board (IPAB), was never an exaggeration. And as we have pointed out, Medicare has the highest rate of denial when it comes to procedures, not the big bad evil insurance companies. “Left” to their own devices, this is where the progressives would lead us, and may I say, unless the left just goes away, it will remain a part of the agenda.

So, do we need death panels to bring the budget under control?