The commission and Krauthammer are totaling up all of the loopholes and deductions available, and in no way is Krauthammer suggesting they all be discontinued. He’s just pointing out we only need to eliminate 10 percent of them to raise the mythical amount the tax rate increase will bring in.

As I have pointed out before, even after I totally stacked the deck in Obama’s favor, the income tax rate hike Obama wants would only generate $40 billion a year … less than $500 billion in a decade.

The IRS does not provide a table broken up by tax brackets, so why don’t we just take a look at the number of returns and taxable income of those who made more than $200,000 in the most recent year we have for data – 2009 (Excel, 59KB). To keep the math simple, we’ll enhance the Obama plan to the point where every single dollar of taxable income over $200,000 is taxed at 39.6 percent instead of the current 33 percent and 35 percent. In other words, I’m totallystacking the deck in Obama’s favor, and ignoring the fact taxable income is less than it was in 2009.

39.6 percent of $843.4 billion is a “new, Obama-approved” revenue stream of $334 billion. That’s a whopping extra $40 billion dollars. The federal government spent $71.5 billon a week in 2010, so the tax increase would cover a few daysof federal spending if all things remained the same, and they would not.

The more common quote mentioned in the media is that Obama’s rates would raise $80 billion a year, but that’s still under $1 trillion over a decade.

So now with this background explained, why is Obama demanding the tax rate increase and ignoring and won’t even consider closing 10 percent of the loopholes and deductions that are available now?

Class warfare works for him and he’s sticking with it. Krauthammer refers to it as pure politics, and nothing to do with economics and he is correct. It’s easier for Obama to push through the tax rate increase on the top 2 percent and claim victory even though many know it won’t do anything to solve any problem.

Click the video to bring you to NRO to watch Krauthammer. 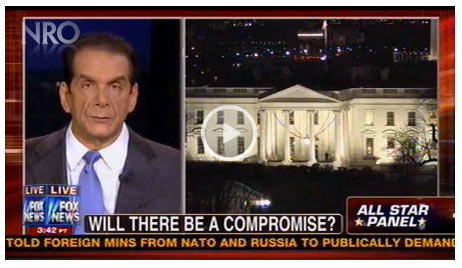 Has Obama lost his mojo?
10 replies