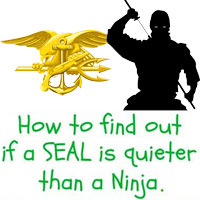 Walker Greentree wants to be a SEAL when he grows up. Or a ninja. It depends on the day. He’s turning 7 in October so that explains a lot. But he’s smart as a whip. He comes from a military family and he’s a member of the elite MilKidz Club.

One afternoon while playing with a friend in the yard, the young Greentree was scolded by his mother. “Be quiet like a SEAL,” said Vivian Greentree. His friend immediately replied – as one would expect from a 7-year old. “Ninjas are quieter than SEALS.” And thus, a monumental argument began. WHO is quieter? Ninjas or SEALS? SEALS or Ninjas?

Obama administration bullies would close every business if they could

Senator Reid’s leadership comes to the forefront
Scroll to top