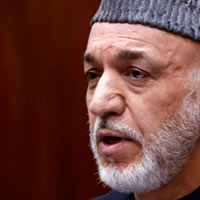 Well isn’t this just grand. I picked up on this little tidbit while reading an AP story on the helicopter crash that killed five US servicemen on Monday night. With Afghan President Harmid Karzai – our supposed partner – saying this kind of stuff, can we just go home now?

I did some more searching and found a post over at Politico that referred to Karzai’s comment as a gaffe. On top of that, our new secretary of defense actually defended Karzai and did not call him out on his bull s&^%? We have American service members and volunteers from many other countries going there to help people and their political leadership is acting this way, while our own leaders in Washington won’t stand up to them? My emphasis in bold.

This time, Karzai accused the U.S. of helping the Taliban stage bombing attacks as a way to justify the presence of American and international troops. The White House called the claim “categorically false.” Top military leaders brushed it off, saying it doesn’t reflect the real nature of U.S.-Afghan relations. …

Defense Secretary Chuck Hagel, who was in Kabul on his first trip to the battlefield since being sworn in to office last month, went so far as to defend the Afghan president after Karzai accused the U.S. of colluding with the enemy that has taken more than 2,100 American lives over more than a decade.

“I know these are difficult issues for President Karzai and the Afghan people,” Hagel said. “I was once a politician, so I can understand the kind of pressures that especially leaders of countries are always under. I would hope, again, that we can move forward, and I have confidence that we can and will deal with these issues.”

So Hagel – as a one-time politician – understands you have to just make stuff up and lie to people? Why can’t we knock on Karzai’s door and tell him to immediately retract his statement? Why doesn’t our own president have the guts to call this for what it is? A total lie.

Other administration officials seem to agree Karzai is some sort of Joe Biden who says stuff off the cuff. You know, Harmid is just being Harmid.

“I don’t think he’s crazy,” national security analyst Peter Bergen told POLITICO. “I don’t think it was a devious, well-thought-out strategy” to make these claims. But it highlights that “he has a very difficult and complex job.”   …

And this represents the leadership we have in the United States.

Open Thread: Is it time to divest ourselves of all things Afghanistan?

Wikileaks: Do they care information could put Afghans in danger?
9 replies

Delusional Sen. Feinstein: It’s legal to hunt humans with 30-round...

Feinstein and Cruz on the 2nd Amendment (Video)
Scroll to top