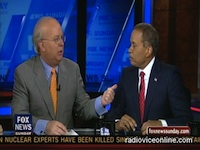 Push back … and great video entertainment for the day. It’s time the lefty talking points get smacked down and Rove obliged.

On Fox  News Sunday Juan Williams tried to make a claim that first Romney had no economic plan while at the same time claiming Romney’s plan just wanted to cut taxes for the rich. Both untrue and Karl Rove smacked Juan down and refused to let him off the mat.

Rove’s point … you can’t have it both ways … saying there’s no plan and then criticizing Romney for an out of touch plan. It was really just a case of Williams trying to hit every O talking point and Rove wouldn’t let it happen.

We need more of this. As conservatarians we want tax reform, not tax cuts for the rich. We want deductions curtailed and  simpler system. Lower rates, fewer breaks. Period.

Britt Hume and Juan Williams get it on: It’s not about trying, it’s about results

MSNBC’s Andrea Mitchell with a Superiority Complex? Update: No apolog...
Scroll to top