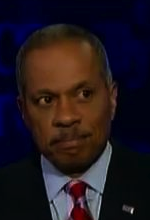 This sure doesn’t sound like a “kiss and make-up” moment. More like “I’ll see you on the airwaves, baby.” Never pick a fight with a man who has 3 million viewers at his disposal.

Last night on The O’Reilly Factor Juan Williams finally got a little heated and it was fun to watch. First, he apparently is no mood to accept an arm’s length apology. Then, once fully heated to a boil, he let’s NPR have it. “They wanted me gone”. Indeed they did Juan. But the best I think comes at the end. Juan is obviously upset and hurt, and he should be.

Clearly, he’s not the kind of guy who likes this kind of publicity and never expected it. But he is obviously very touched by the outpouring of support, especially from his “bud”, Bill O’Reilly. “We’re not letting go of this madam, we’re not letting go.” Uh Oh.

UPDATE: Sorry I didn’t set up the video. The conversation picks up right after watching NPR’s Vivian Schiller making her famous “His feelings are between Juan and his psychiatrist” comment which I have posted below on the blog.

Fair and Balanced: Krauthammer and O’Reilly on the Obama speech-“kicking and screaming”

Hubris, the first in an occasional series-UPDATE The Harry Reid edition
Scroll to top