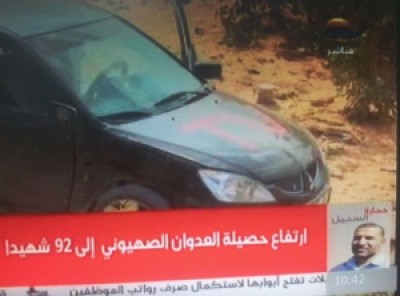 The leader of the Hamas militant training programs in Gaza has been driving around in a civilian vehicle with “TV” imprinted on the hood. The dirty trick – making things even more dangerous for real journalists – didn’t work, and Israel targeted the goon anyway.

I understand the press will be “used” in many ways by all sides, but really … isn’t using press credential markings and facilities as human shields too much to handle for journalists? Is it possible their presence is actually making it more dangerous for civilians?

The “human shield” method, as it is commonly known, has forced the IDF to target seemingly non-military targets, resulting in some of the civilian casualties. It has also endangered all residents of the Gaza Strip who, without their consent, were unwittingly dragged into the conflict.

One such example came in today, when a senior Hamas operative was targeted while driving a press vehicle. Muhammed Shamalah, commander of Hamas forces in the southern Strip and head of the Hamas militant training programs, was targeted by an Israeli air strike while driving a car clearly labelled “TV”, indicating it to be a press vehicle, abusing the protection afforded to journalists.

They set up rocket launchers in school yards, in residential areas, and next to Mosques. This is not something they do occasionally, they do it all the time. As a primary strategy Hamas and other terrorist organizations use civilians as cover since they know photos of dead children get a lot of media attention in the west.

Hamas uses the media as their weapon against Israel

How the Arabs have rejected a Palestinian state

Juan Williams: Israel must not hurt Hamas too bad

Jihad talk in the USA – At what point to you arrest them?
Scroll to top