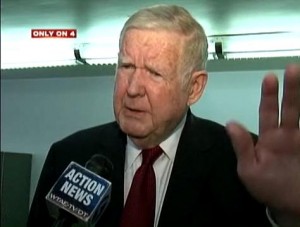 The people of the United States need to be aware of the federal government subsidies that are handed out to local communities on a regular basis, and they need to realize this graft is unconstitutional. If you want it in your state, pay for it yourself. Stop depending on what you refer to as “free” money from Washington, it’s not free and it’s destroying our country.

If you’re one of the people who live in New Alexandria, Pa., you’ve got a couple of airport options. You can head west to Pittsburg, or head east to John Murtha’s Johnstown-Cambria County Airport. Either way, the travel time is about an hour. Live to the east of Murtha’s airport? Head to east to Harrisburg. You live where you live, and sometimes it’s quick and easy to get to an airport and sometimes it’s not.

Heck, my travel time to the airport is about five minutes, where a friend in Spray, Oregon has to travel almost four hours to get to the airport at Portland.

Question: What is the maximum distance and travel time an American should have to travel to get to an airport that provides daily service to a major hub before the federal government steps in and spends a couple million to build and sustain an airport?

That really is the question is it not? Actually, it’s more about congress-critters like the late John Murtha, who wielded so much power in Congress after 36 years, he was routinely in a postions to choose winners in the federal pork game. One of the winners was his $150 million airport that has three departures and four arrivals per day, all to and from Washington’s Dulles International Airport.

If it was just the $150 million, that would be bad enough. But as it turns out, the federal government continues to subsidize this airport to the tune of $100 per ticket plus additional subsidize to keep the place running.

Of course, ABC News is not mad about this, they present the story as an “oh well, isn’t this interesting lifestyle piece” instead of a hard-hitting what the heck is going on in Washington review. Nothing to see here, it’s just standard operating procedure and only a few hundred million … it’s nothing really.

Good for me, not for thee… again.