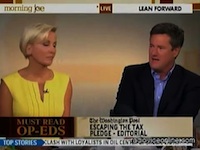 It’s flatlined. In a rare moment of candor from Morning Joe cohost Joe Scarborough, the former Republican congressman tries to explain to his lefty colleagues why raising taxes over and over again is not good for business it’s not good for the economy and it’s not good for creating jobs. And his exhibit a is the state of Connecticut.

This is actually from yesterday’s show but I’m just getting around to posting it now and trust me when I tell you it’s well worth the watch. The subject is whether or not spending cuts or tax increases should be the primary way of reducing the deficit. But Joe, who stunned me with his clarity, makes the case not for tax increases, or even a balanced approach, but for cutting spending. And he uses Connecticut as the prime example, and Lowell Weicker or as exhibit A.

Although it’s a bit of a distraction to this post, I do get a chuckle out of Mika’s comment, why can’t we raise taxes just back to normal levels.

But let’s take a look at the numbers for the state of Connecticut.  From 1981 until 1991 when Connecticut passed its first income tax, jobs grew by over 200,000. After the income tax was passed until today jobs have increased 80,000. That’s 40,000 a decade. That’s definitely flatlined. You can find the figures here.

Now to be fair there are other factors that play into this. We were entering a recession in 1991, which should’ve told Connecticut not to institute an income tax, and of course we’ve had the great recession of 2009. But even in between in what could be called the good times Connecticut’s employment picture grew very little. Check the numbers out for yourself and then ask yourself what it might have looked like had we not had an income tax, remembering of course that the more jobs you create the more revenue, even without an income tax, your state takes in.

Catholic Church under fire once again

When birds attack: Be afraid, be very afraid

Congressman Ryan: Our nation’s sovereignty is at stake

The President has “summoned”?
Scroll to top