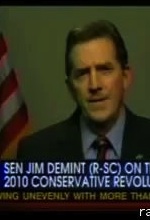 I could not agree more. Should the Tea Party, by whatever name, ever organize into a political party due to a lack of fortitude on the part of the GOP, I am pretty sure the Tea Party will become the major party.

Jim DeMint on Fox News yesterday has been one of the Tea Party’s movement biggest supporters. He, unlike Republicans, heard the cry of the citizens early on because they are most closely aligned with his political views. So he vows to fight the good fight against profligate spending, inordinate taxation and an overbearing government in the name of “can’t we all just get along.” Well the GOP has better get the message, or he is gone as well. Via, RealClearPolitics Video

There are, in case you have not noticed, a number of prominent politicians who have been quietly assembling a political organization to match the conservatarian uprising among the citizenry. DeMint is not the only one watching the GOP as we pointed out yesterday.

I doubt that the Republicans will trip up so early on, but then you never know. On the other hand … is the groundwork for a new independent party already in the works?

Open Thread: Your thoughts on the GOP debate in Las Vegas last night