Chuckle. John Hinderaker over at Powerline writes Whose interests are special? where he points out liberal special interest groups are vowing to make life absolutely miserable for any company – really any person – who contributes to GOP candidates this year.

What is really going on here, of course, is that unions and other left-wing groups want their near-monopoly on big-time political money to continue. Historically, the vast majority of special interest dollars that have been contributed to political campaigns have been on the left, and most of the money has come from unions. This chart from Open Secrets shows the top 25 donors to political campaigns from 1989 through 2012. You will note a remarkably consistent pattern.

Click here to check out the interactive spreadsheet over at Open Secrets, but here is a screen shot. Of the top 20 organizations, 76.6 percent of the money goes to Democrats and at least 13 are big union operations. Will the liberals please stop complaining about big money flowing to Republicans now? Doubt it highly… 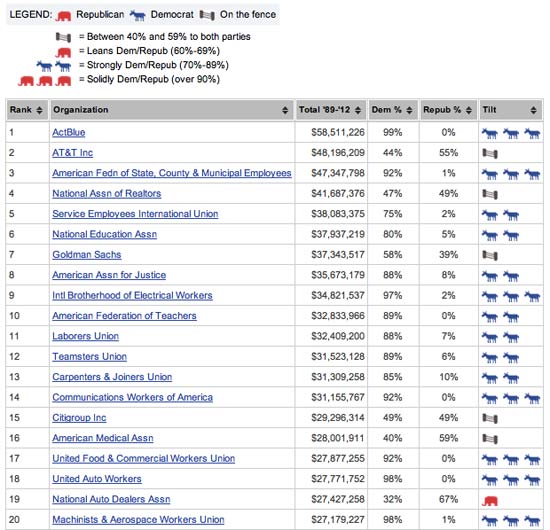 Take A Pay Cut … Save A Job

Is bankruptcy court in your city’s future?
17 replies