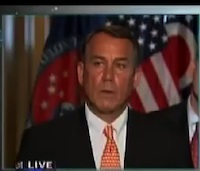 I stayed up late enough last night to watch the young president deliver his victory message. And Drudge is right, it’s almost as if you were taking credit for cutting the budget. And when all is said and done it’s not very much. The final total of budget cuts was about $40 billion. And almost $80 billion less than what the young president had asked for in his original budget request last year. I know, I know. It’s a pittance. But, just as the lefties did for decades when they built the federal government to a ginormous size, we begin to dismantle brick by brick. Or am I wrong? Details below the fold.

Forget who won or lost, the most important thing to remember here is Congress didn’t rubberstamp another Obama budget and while it’s small it is smaller than what Pres. Obama had sent Congress a year ago.

Working late into the evening Friday, congressional and White House negotiators struck an agreement to pay for government operations through the end of September while trimming $38.5 billion in spending. Lawmakers then approved a days-long stopgap measure to keep the government running while the details of the new spending plan were written into legislation.

Actual approval of the deal would come in mid-week.

“Today Americans of different beliefs came together again,” President Barack Obama said from the White House Blue Room, a setting chosen to offer a clear view of the Washington Monument over his right shoulder.

According to three different reports I have read it looked like Boehner was drawing the line at a total of $40 billion in cuts, and apparently let the negotiating teams know he was about to accept anything less. That explains why we heard initially there was a deal for $33 and then $35 billion.

At one point, Democrats announced negotiators had locked into a spending cut figure — $33 billion. But Boehner pushed back, publicly declaring there was no agreement. This week, during a meeting at the White House, Boehner said he wanted $40 billion. The final number fell just short of that.

As for those controversial riders, it looks like both sides got a little bit of what they wanted, unfortunately.

Democrats knocked off most of the controversial policy riders that House Republicans had included in H.R. 1, the package of spending cuts that passed in February, including one on funding Planned Parenthood, which provides abortion services.

“We also prevented this important debate from being overtaken by politics and unrelated disagreements on social issues,” the president said in his morning address.

Republicans, however, won the inclusion of a rider to expand the District of Columbia’s school voucher program and to authorize a Government Accountability Office study of a financial oversight board established by the Wall Street reform bill.

So, who won? Carl Cameron and Fox News thinks the Republicans did. It’s a great post go ahead and read it all.

Here’s why: HR1 was originally to seek spending cuts of $32 billion until Tea Party conservatives insisted on more than $ 60 billion. House Speaker John Boehner won more cuts than he originally sought and got the Senate to agree to votes to defund the health care reform law and groups like the nation’s largest abortion providerPlanned Parenthood – once votes Senate Majority leader Harry Reid said he’d never allow to come to the floor.Back on February 3, Reid called $32 billion in cuts “extreme” and “draconian.”

At a news conference New York Sen. Chuck Schumer, D-N.Y., agreed, “I happen to think some of their cuts are extreme and go overboard. But every week they keep upping the ante and proposing extreme cuts.”

Over the next decade the cuts are expected to save hundreds of billions of dollars.

Even Craig Crawford at the Huffington Post thinks the budget negotiations scales tip to John Boehner.

If this debate was about pushing Obama to accept more cuts than what many Democrats wanted, it looks like Republicans won.

In the interest of fairness here’s the President’s Saturday address on the budget. Catch the young President as he continues to use the word “investments”, which is synonymous with spending, which means plenty of battles lie ahead. Notice how he also takes credit for maintaining George Bush’s original tax rates. Ahhh, So much work still to be done my little mobsters.

I’ll have more video as the day goes on from Karl Rove last night and Paul Ryan’s radio addresses well. Stay with us today.