And this is the organization that will be in charge of the Obamacare mandates. Remember the Inspector General audit pointing out the targeting of TEA Party groups when it came to IRS tax-exempt approvals? We also have another audit – again published last summer and not released to the media prior to the election – pointing out a huge problem with the distribution of IRS refund checks.

Here is a direct link to the report [PDF] posted on the government’s Treasury website. Here is a broad view of the results.

Makes you feel all warm-and-fuzzy about health care and the federal government right? From Page 18 of the audit, we find the following table, noting that one address – on one year (2011) – received $46 million in tax refunds sent to 23,994 different people represented by ITIN numbers. 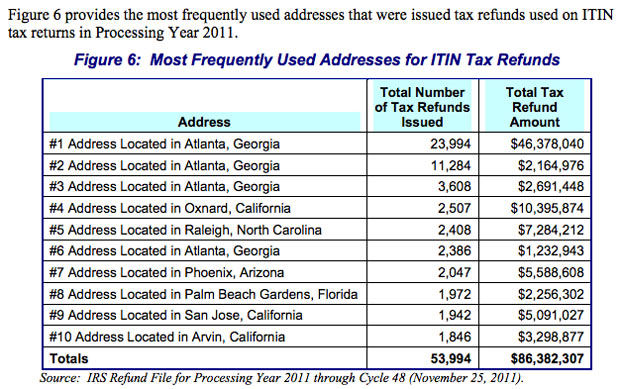 Nah, this isn’t really a problem is it?

To some how summarize this mess, it’s very easy to get an ITIN, which is a number assigned only to resident, legal aliens who are working in the United States and are not able to have a Social Security number. Once one has an ITIN, it is much easier to collect benefits and commit tax fraud. This tax fraud can be done on a small scale or – as we can plainly see from the top 10 most frequently used ITIN addresses – in a very large scale. From Page 6 of the report.

Therefore, it is essential that the IRS have adequate processes and procedures that ensure only qualified and eligible individuals are assigned an ITIN.

This report will be ignored by the main stream media as usual. I first read about this over at Michelle Malkin’s blog five days ago and I was wondering if anyone picked it up. Quite a few blogs have it and even two local network affiliates in Atlanta are covering it, but Fox News? CNN? ABC News? CBS News?   Crickets…

If you ask the IRS, they will say this was a problem before, but new processes have been put in place so we don’t have to worry about it anymore.

Øbama’s implementation of the “DREAM” Act

Does it really matter who the Top 1% are and how much they make?

Not Quite Pravda
6 replies