On the 31st anniversary of the Islamic Revolution in Iran, the countries leaders have announced a huge blow to the west. The stunning “punch” leaves western leaders unbalanced as they make plans to meet in emergency session at the United Nations. Iran turned off GMAIL!

Scroll down for Ahmadinejad update on the (real?) big story. Planet Iran is live blogging protests in Iran today.

Since it’s currently 3 p.m. in Tehran, I elected to move through the news this morning to find out what the dreaded announcement purported to knock back western countries on their knees. Iran has certainly punched the arrogant western powers. They turned off access to GMail and created their own e-mail network. Gosh knows how they will ever be able to live without Buzz.

Iran’s telecommunications agency announced what it described as a permanent suspension of Google Inc.’s email services, saying a national email service for Iranian citizens would soon be rolled out.

It wasn’t clear late Wednesday what effect the order had on Gmail services in Iran, or even if Iran had implemented its new policy. Iranian officials have claimed technological advances in the past that they haven’t been able to execute.

A Google spokesman said in a statement, “We have heard from users in Iran that they are having trouble accessing Gmail. We can confirm a sharp drop in traffic, and we have looked at our own networks and found that they are working properly. Whenever we encounter blocks in our services we try to resolve them as quickly as possibly because we strongly believe that people everywhere should have the ability to communicate freely online.”

An Iranian official said the move was meant to boost local development of Internet technology and to build trust between people and the government.

So I had a little fun there, and I’m not quite certain if Iran makes major earth shattering announcements at the end of the work day, but the story in the Wall Street Journal is true.

For Iranians, this can not be a good thing. In one way, I would expect the Iranian government can monitor some electronic communications easily so I’m not sure how dangerous the GMail cut-off is. On the other hand, Google has recently turned on HTTPS security for all of their accounts here in the U.S., but I’m not sure if the same goes for Iran’s GMail version.

Is Google really having network issues in Iran? Is this a true network problem, or does Iran simply want a easy way to track all Web traffic and internal e-mail communications?

You’ve gotta figure the “big punch” to the arrogant west would have been announced earlier in the day, but maybe they are timing it for the 6 p.m. news cycle. 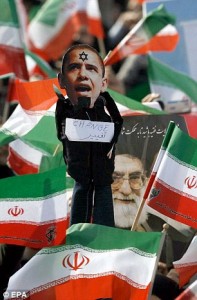 Ahmadinejad told a vast, flag-waving crowd of government supporters that Iran was now able to enrich uranium to more than 80 percent purity, coming close to levels experts say would be needed for a nuclear bomb, although he again denied it had any such intention.

“The Iranian nation is brave enough that if one day we wanted to build nuclear bombs we would announce it publicly without being afraid of you,” Ahmadinejad said, addressing Iran’s Western enemies.

But he told the crowd in Azadi (Freedom) Square: “When we say that we don’t build nuclear bombs, it means that we won’t do that because we don’t believe in having it.”

From what I can quickly find online, it looks like you need to be able to enrich uranium to 93 percent for nuclear weapons. Why is Ahmandinejad so comfortable with announcing what they are doing? He knows nobody will do anything about it.

Update 2: Steve Gilbert at Sweetness & Light notes the Islamic Republic News Agency thinks the west has been crushed by a tremendous display of …

… national solidarity, an alarming and crushing response to enemies.

More at the UK Daily Mail.

Inviting Iranian diplomats to the 4th of July barbecue
3 replies

Small business not likely to take advantage of “jobs” bill Snow storms “create or save” more jobs than Obama administratio...
Scroll to top