The supreme leader in Iran – Ayatollah Seyed Ali Khamenei – has noted he is quite confident the Zionist regime is moving towards certain annihilation … God willing.

Should the United States diplomats ignore the supreme leader of Iran and let him get away with this type of talk? Why even bother with any sort of diplomatic relations with leaders who speak this way? Hat tip to Jim Hoft at Gateway Pundit who links us to Fars New Agency based in Tehran.

“I am very optimistic about the future of Palestine and believe that Israel is moving on the precipice of wane and demise, and God willing its annihilation is for sure,” Ayatollah Khamenei said in a meeting with Secretary-General of the Palestinian Islamic Jihad Movement Ramadan Abdullah Shallah here in Tehran. 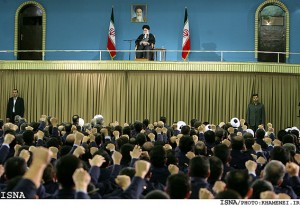 He also called the Zionist regime’s inability to dominate Gaza a miracle, and added, “Despite all its financial and political aids and after laying siege (on Gaza) for more than two years, the Zionist regime could not defeat the resistance of Palestinian people.”

Elsewhere, Ayatollah Khamenei referred to the attempts made by certain Arab governments to help the Zionist regime, and said these attempts are certainly doomed to failure as the Muslim nations always support the Palestinian cause.

Abdullah, for his part, admired the Iranian nation’s vigilance against enemies’ plots, and said, “Today the Islamic Republic of Iran is experiencing its best conditions and is in its strongest position.”

“Everyone honors the righteous positions of Iran,” he reiterated.

“Certainly the right will be victorious,” he added..

Oh come on … we all know he doesn’t really mean it. Click on the image above to see it enlarged. Nice salute the supreme leader is getting there.

Inability to lay siege on Gaza? Is he kidding?

Zbigniew Brzezinski: Iraq just not worth it.

Inviting Iranian diplomats to the 4th of July barbecue

Flotilla of Peace … not so much, says Israel – Video of “peace” weapons