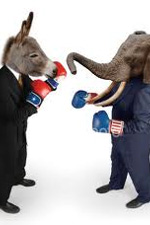 With the last update from the NBC Political Unit prior to election day, every change analysts have made concerning House of Representatives elections have shifted in favor of the Republican. This in no way means Republicans are favored in the race, but is a clear indication of momentum for Republicans.

Hat tip to Founding Bloggers, who points us to the NBC update. NBC rates challenges like everyone else, and remember only 37 Senate seats are being decide this year. All House seats are in play. Races are tagged (in this example) as either Solid Dem, Probable Dem, Lean Dem, Toss Up, Lean GOP, Probable GOP, or Solid GOP.

As many others have noted, NBC can afford to skew the polls Left up until a few days before the polls open. By then they have to move the predictions closer to reality so that they don’t get completely destroyed when their polls wind up off by 15 points.

By that time it is hoped the damage has already been done.

If you look at the big picture – at least as suggested by NBC – the momentum is moving way right 84 hours from election day.

Palin could be next national conservative leader

What was Wrong with the Polls in New Hampshire