I’m not a journalist, therefore I have the ability to speculate and post information from questionable sources. You can take it or leave it. With that said, I’ve been thinking about what happened on Easter Sunday in the Indian Ocean where three Navy personnel shot and killed three pirates holding Capt. Richard Phillips hostage in that lifeboat.

My speculation, comments and questions. Click on the images to enlarge, all courtesy Blackfive. 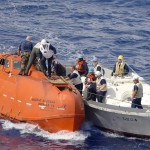 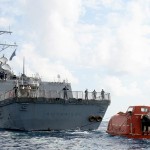 Since they were towing the lifeboat in an assumed normal matter – from the bow – how did the Navy personnel shoot all three kidnappers from the fantail of the Bainbridge? How could they tell that Phillips was in eminent danger? Only if the rear hatch was open and eyes were able to see inside would they know Phillips was in imminent danger. Heck, he was in danger the entire time.

No matter – I’m perfectly happy with the results, but who is twisting this story and will it become a big deal when the Somalia teen is brought to New York for piracy on the high seas?

Yes, this information came from the Internet, and you can consider it speculation if you’d like. I’ve cleaned up the text (language) from the original.

Having spoken to some SEAL pals here in Virginia Beach yesterday and asking why this thing dragged out for 4 days, I got the following:

The e-mail goes on to reference an account written by Jeff Emanuel, that seems to be right on the money. Emanuel is a professional writer and editor with a military background. Do read his entire post, but here is a brief excerpt.

… Keeping his authority to act in the case of a clear and present danger to the hostage’s life and having heard nothing from Washington since yet another request to mount a rescue operation had been denied the day before, the Navy officer – unnamed
in all media reports to date – decided the AK 47 one captor had leveled at Philips’ back was a threat to the hostage’s life and ordered the NSWC team to take their shots.

Despite the Obama administration’s (and its sycophants’) attempt to spin yesterday’s success as a result of bold, decisive leadership by the inexperienced president, the reality is nothing of the sort. What should have been a standoff lasting only hours – as long as it took the USS Bainbridge and its team of NSWC operators to steam to the location – became an embarrassing four day and counting standoff between a ragtag handful of criminals with rifles and a U.S. Navy warship.

Capt. Phillips has just arrived at home in Vermont and there was a short meet-the-media event. 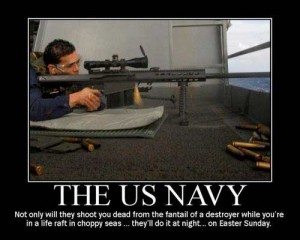 Recounting, not rewriting, history – the Great Depression Torture memos: NOT a dark and painful chapter in our history
Scroll to top