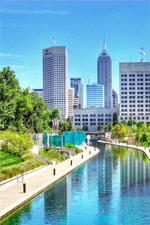 If there are tensions between urban police departments and the African-American community, this kind of stuff won’t help one bit. An Indianapolis police officer was invited to give a presentation at a youth symposium where organizers staged a fight to see how the [white] officer would react.

News 6 in Indianapolis is reporting the story, with my emphasis added.

During the presentation, an altercation broke out in the crowd, and [Sgt. Matthew] Grimes intervened. The officer was thrown to the ground and drew his Taser, ready to stun one of the people involved, police said.

At that point, someone stepped in and told the officer that the incident had been concocted to test the reaction of the officer to the situation, police said. Grimes suffered severe back spasms after the incident and was taken to Methodist Hospital for treatment.

James Harrington, pastor of the Mt. Vernon Missionary Baptist Church, said he set up the scenario to test a white officer’s reaction to a fight between two black men.

One of the players – Ennis Adams Jr. – stated it was a performance, not something to ‘bait’ an officer, but Pastor James Harrington said “the scenario was an effort to test the officer’s response to an argument involving two black men”. That’s baiting the officer. The fake argument escalated to a physical one, which seems to have resulted in a back injury to the police officer.

Harrington even claims he used professional actors who were trained. Of course, Grimes was not an actor. I’m wondering what the background of Adams is – is he a professional trained actor?

Indianapolis certainly is going through a rough spot when it comes to police/resident relations. I have not had the time to read all of the stories concerning the alleged beating of a 15 year old by police during an arrest in May, but it looks like the kid was interfering with the arrest of his older brother. Whether or not excessive force was used, the following comments really caught my eye.

Anybody else notice what I’ve noticed?

Several members of the clergy also joined in Monday’s protest, calling for officers involved in the incident to be charged.

“We want the prosecutor to charge them with criminal behavior and let them prove themselves to be innocent. That’s fair,” said The Rev. T. Garrott Benjamin with Light of the World Church. “It’s not for us to be the judge on the street. It’s for them to go to court, and if they are innocent, prove it.”

Update: Just thinking this morning … where’s the video? There has gotta be video…