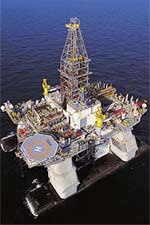 I’ve been meaning to write a more comprehensive post about the Gulf oil spill for more than a week and this post is my attempt to do so. But first I want to quickly note President Clinton’s comments about blowing up the well, and why some engineers think it’s a bad idea.

Update (July 30, 2010): The Center for Public Integrity has a report about decisions made after the explosion which you’ll find to be a good compliment to my post below. (Hat tip to Ed Morrissey at Hot Air.) Back to the original post…

In the high-tech oil drilling community – who happen to have some really smart engineers – there is a concern the well casing has been compromised beneath the sea floor. For an analogy, think of the well casing as a garden hose, and the all-famous blow-out preventer (BOP) as a spray nozzle from which you can control the flow.

In this bad scenario, the casing could collapse and the BOP could just tip over as the sea floor support eroded over time. Oil. Spews. Everywhere.

Equally relevant – especially to novices – is the opinion from engineers that the BOP and the casing are so big and strong, collapse is unlikely. The BOP is connected to a 2 inch thick steel pipe that is 3 feet in diameter, extending more than 250 feet into the sea floor. This pipe (casing) is connected (cemented joints) to subsequently narrower pipes of 28 and 22 inch diameter continuing more than 2,800 feet below the sea floor. It’s a strong structure.

Although the federal government has all but taken the blow-it-up-with-a-nuke option off the table, that does not mean consideration has not been given to blowing it up and stopping the flow using conventional means as Clinton suggested. (Hat tip to Hot Air.)

In my opinion, the speculation that BP is trying to save the well to ensure they get oil from it in the future is completely absurd. Clinton, nuclear submarine officers, and congress-critters wondering why BP has not just stuck some dynamite down there and blown it up to stop the flow immediately is equally absurd.

Do we even have the technology to do this one mile underwater? What are the risks involved? Could blowing up the well result in the first engineer’s disaster scenario above?

So, what happened out at Deepwater Horizon?

The following is a brief primer on oil well drilling basics pieced together from various sources along with some analysis as to what may have happened.

On June 11 I read a letter to the editor from Terry Barr, president of Samson Oil and Gas in response to an Op Ed piece written by Tony Hayward, CEO of BP plc. Two Radio Vice Online readers – a recently-graduated oilfield engineer (Craig P.), and a corrosion engineer (Dan P.) with decades of experience including many years in Prudhoe Bay, Alaska (a.k.a The Slope) – gave it a shot at translating for the masses.

After the first casing is cemented in place, more drilling takes place (if needed) and more casings are added deeper within the well bore. These additional casings are progressively narrower in diameter since they need to fit within the walls of casings above.

The cement in the void prevents natural gas or hydrocarbons from escaping. You want the oil and gas to eventually come up inside of the casing, not along the inside walls of the well bore.

You keep going as required, and before you hit the oil and/or gas reserve, the BOP is placed and tested.

For Deepwater Horizon, it appears the cement within the void did not properly adhere to the pipe and the well bore. Per Terry Barr’s letter, BP didn’t go back and redo the (expensive) cementing job which would be the normal industry standard, despite multiple diagnostic tests, which suggested a problem. They continued.

The next part of the process was to temporarily abandon the well. (I’m not sure what that means or why they did that.) The process involves removing a lot of heavy drilling mud from the well, and replacing it with comparatively low density sea water.

Since the dense drilling mud is used to contain any gas or oil, they lost the primary mechanism for controlling the reservoir pressure when the well was being completed. Barr properly notes the BOP is a backup system that never should have to be used.

With only lightweight seawater in place to hold back gas within the casing, the contents pushed their way up to the Deepwater Horizon deck. Spark. Explosion.

Consequently, Barr attributes the root cause of the explosion to human error, where BP CEO Tony Haward suggests we need better safety technology, pointing to the BOP failure (which is another post in itself) and does not mention the human errors that started well before the explosion on Deepwater Horizon.

[We must] emphasize the impracticality of converting to 100 percent green energy technology at this time. With the exception of some of the oldest cities in the USA, the infrastructures of all the major and minor cities have been built around the use of the automobile.

Natural gas is plentiful, but there are very few places where one can go for a quick refill. Also, where can one go to get their batteries recharged if they’ve got an all electric car? (Who would pay the electric bill to recharge your car while you’re in the office or going shopping?)

Solar power is good for small applications, but still impractical for industrial applications. Wind farms are good for supplemental power loads – when the wind is blowing – but is not sufficiently dependable to meet the primary base loads for power demand. (How much efficiency will the windmills loose when they are “bird-proofed?”)

Indeed, we need new sources of energy, but it will take time to develop technologies and help them mature to the point where they become commercially viable options. As such, we must still rely upon oil and natural gas resources for not only fuel for transportation or power, but also as a feedstock for our petrochemical industry and all the chemical products we commonly use, but don’t recognize as having come from natural gas and crude oil.

Kagen-sure in some cases you can ban books

Clinton to Obama: First plug the hole
Scroll to top