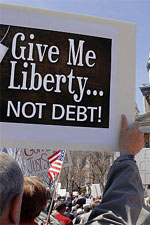 Will residents and companies stick around or will they bolt? Indiana is expecting and influx of migrants from President Obama’s home state and New Jersey Gov. Chris Christie (R) is planning on taking the next flight to O’Hare to pitch the Garden State as one who would welcome companies ticked off at the irresponsible move made by the Illinois state legislature and Democrat governor.

If a firm believer that people will flat out move to a different region or state to make improvements in their own lives. Don’t tell me people don’t move away from friends and family due to the cost of living.

I’ve got multiple friends, some with kids and some without, who have sold homes and moved away from where they have lived for decades within the last 18 months. The reasons? Taxes, the cost of living, school quality, activities and climate were the top five reasons in that specific order.

It’s even easier for companies to make a move. Certainly, there is a large initial investment when moving operations or manufacturing from state A to state B, but when you can prove the value of the move in a basic Excel spreadsheet and show a return on the investment within five to 10 years, guess what happens?

The state has chosen to face reality by raising taxes, but there seems to be absolutely no discussion about cutting the size of Illinois’ monstrous government. As a matter of fact, state leadership is proud to point out they will be forced to limit spending increases a modest 2 percent for the next few years.

As it turns out, those increases are “mandated” by union contracts so those costs are off the table of course.

Steve Gilbert at Sweetness & Light points us to a New York Times opinion post that never even bothers to mention the 66 percent figure – it is 66 percent – and won’t even point out that if you paid $2,100 in state income taxes last year, you’ll be paying $3,500 this year.

The Times actually points out California, New Jersey and New York having a higher tax rate than Illinois. Yet, they completely ignore the fact those states – with their super-high tax rates – are flat out broke too.

How come we conservatives have been screaming about reality for years and years and just now people are coming to “face reality?”

Obama, Biden – new bank taxes will “get our money back”

Democrats to Connecticut: If it moves … tax it!

Federal Tax Scofflaws: One Down, Thousands to Go.
6 replies