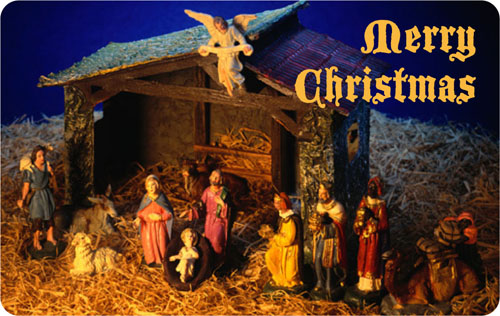 Generally I spend my afternoons sleeping, or you can probably understand,   praying. All running through the Internet I came across this fabulous column@the Patheos.com website, under the Patheos Catholic section. The author, Marc, does a beautiful job not just explaining the answer to that question but the majesty and the glory of what really takes place on that Christmas morning. I’m going to highlight my favorite section and I’ll be reading it in the morning. but please take the time to read the entire article.

What Christian insanity is this, that a word is a person? Well, in the vein of St. Augustine, chickity-check it out: God is infinite. If an infinite being were to conceive of Himself — that is to say, if God were to think the thought ‘God’ — what would be the logical outcome? When you or I think about ourselves, it is never a perfect thought. We can barely conceive of what we look like, much less who we actually are. But a perfect being would necessarily conceive of Himself…perfectly. Make sense?  God conceives of Himself perfectly. But — and here’s the crux — if that thought remained just a thought it would never be perfect. As a mere thought, it would always be missing one crucial characteristic — existence. Inseparable from God is the fact that He exists. He is real. Thus if God were to think of Himself, and that thought were not to actually exist in Reality, He could not be perfect. His thought would not fully contain Who He Is, because existence is central to Who He Is.

But God is perfect. So he conceives of his own being, he thinks the thought ‘God’, and it exists in reality. He speaks his own Name and his Name must exist. The thought remains one with Him — we’d be fools if we claimed that every time we spoke a thought it was lost to us — but it also exists as its own person. We call that person Jesus Christ. He is one with the Father, for he is the Word of the father, yet he exists as an individual person.

So what a marvelous humility for the spoken Word in his divine glory to be struck speechless in his human infancy! We often manufacture a false conception of the Infant, that he was God somehow ‘hiding’ in the body of a little baby. That, since he was God, he could have spoken whenever he wanted to, walked whenever he wanted to, but instead chose to act like the baby he was. As fall as I can tell, this is stupidity. God became man, fully man. He did not merely take on our strengths; he also took on our weaknesses. He took on our helplessness and our inabilities. And in doing so he made this divine declaration:

Our weaknesses aren’t weaknesses at all. Sin, now there’s weakness. But dependency, humility, and abandon — these are not things be disdained, but embraced. If Christ was humble enough to become man, surely we are to be man enough to become humble? If God depended entirely on Mary, surely we must depend entirely on God? If God shut up and simply was for the first part of his life, surely we must imitate this Divine Speechlessness and, like the littlest of children, take time in silence? The person of Christ turned the entire world on its head, but only because the world was always meant to live in a somersault. Greatness became small, and now Smallness is great. The Source of all Strength became weak, and now “strength is made perfect in weakness.”

It’s a long article and if you’re into theology it’s a great read. Now much of it is based on Catholic theology, and on the Eucharist, so I’m sure I’ve offended somebody by posting this. But I’ve put up the portion that touched me the most. I am hoping it will touch you to. Have a Merry Christmas. Tis the reason for the season.

For those of you were wondering there are different sections on the Patheos.com website, including Patheos Catholic, Patheos evangelical, even Patheos atheist. It’s worth exploring.

The Christmas story as told by children

Afterburner: How progressives and the left warp the meaning of the Constitu...
Scroll to top