I’ve been stuck on this fact. Individuals and families who did not have health insurance coverage prior to Obamacare had every opportunity to research available plans online, compare coverage and purchase coverage. No government websites were ever needed. But now that they have the new pretty government sites, what is the cost difference between pre-Obamacare rates and today?

It’s damn hard for an individual like me to do something like this – especially since the Obamacare exchanges require you create an account and log in before seeing any available plans and rates – so the good folks at Heritage put together an issue brief on Oct. 16.

Aside from the issues associated with actually purchasing health care, once an individual gets a quote for health insurance on an exchange, is the premium higher or lower than before?

Isn’t that the real question people should be asking? Why isn’t the main stream media asking this question? Certainly we’ve heard White House spokespersons mention anecdotes of individuals paying less in premiums than they did before, but they never provide details about the coverage, deductibles or if they were over-paying before when they did not have to. Back to Heritage, who ran the before and after numbers as best they could. I looked for some left-wing think tank paper that refutes Heritage’s information, but they are silent. My emphasis is in bold.

Individuals in most states will end up spending more on the exchanges. It is true that in some states, the experience could be the opposite. This is because those states had already over-regulated insurance markets that led to sharply higher premiums through adverse selection, as is the case of New York. Many states, however, double or nearly triple premiums for young adults. Arizona, Arkansas, Georgia, Kansas, and Vermont see some of the largest increases in premiums. 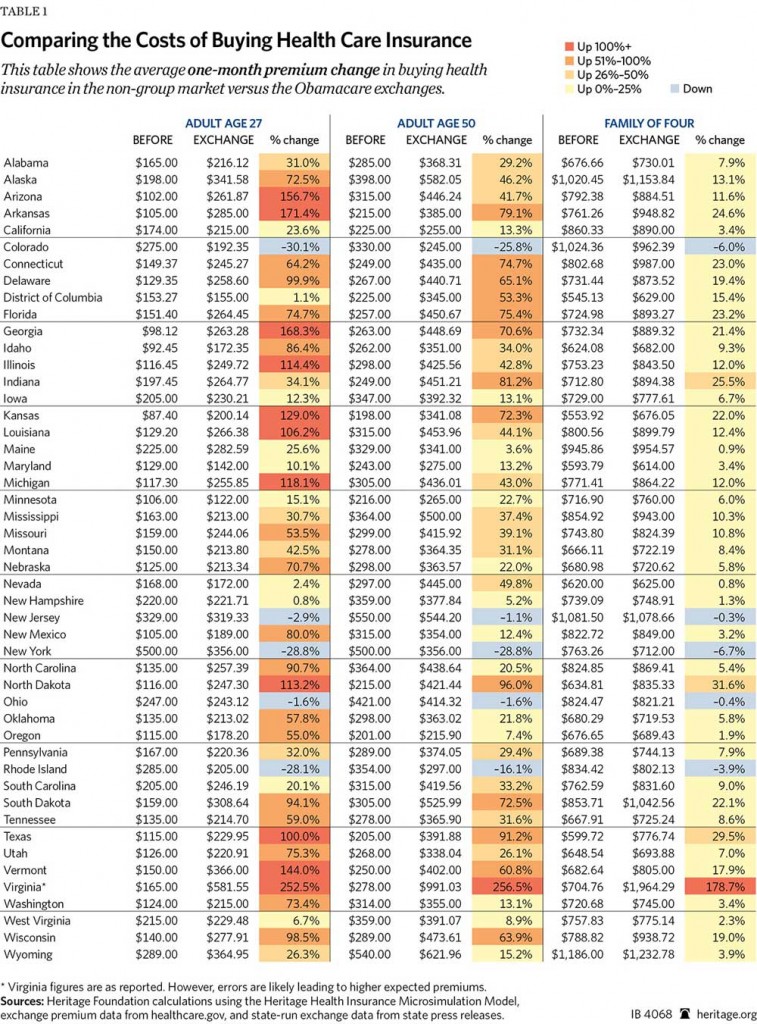 [Sorry, I’ve lost what I’ve written in the rest of this post and will try to re-create some of it with bullet points.]

I’d like to hear from anyone whose individual coverage premium costs have dropped and the plans before and after provided the same coverage with the same doctors and health care providers in network. I don’t think any are out there, and if there are some, there are not many.

What it comes down to is this. Obamacare supporters claim the system might not be perfect, but now at least “millions of people now have access to coverage.” That is a total lie. Those people certainly did have access to health care insurance and health care, they just didn’t want to or could not afford the coverage costs. I’m arguing – and the current facts support my argument – this is a marketing campaign to make people think they are getting a better deal than they would have before. Certainly some will now buy into the individual system, but without the federal government’s involvement and excessive mandates, I’m willing to bet the coverage costs would be a lot less than they are now.

Obamacare is a sales-job. Think about it, they have been trying to sell this idea to us for years yet still the majority of Americans don’t think it’s any good. It’s all about marketing and getting people to buy into a program without providing any of the real details and how it will effect us in the future.

[Sorry if this post seemed to fall apart at the end. I had some really good commentary in there, but it was lost due to a computer problem, and I just don’t have anymore time today to fix it.]