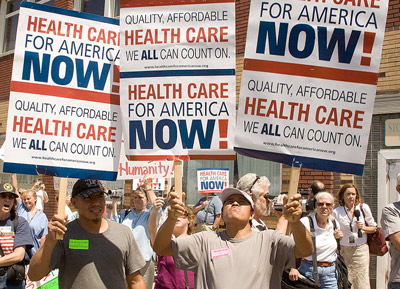 That’s the real question I’ve been thinking about this morning. Sure enough, AP over at Hot Air was thinking about the same thing last night when word leaked the federal exchange had signed up about 50,000 during the last 40 days or so. But…

How many of those enrollees are young and healthy? The administration won’t answer the question. They have the data, but why would they release the age brackets unless it improves the outlook for them? From Hot Air.

Fearless prediction: They’re not going to release the demographic data. The only way to make these numbers look more dismal than they are is if it turns out that many, or even most, of the 100,000 who’ve enrolled are older people or people with preexisting conditions.

I’m also wondering how many of those enrolled got some sort of subsidy or were enrolled in Medicare or Medicaid.

The program’s target – Obama’s goal – was to have about 500,000 enrolled in the month of October. The most liberal number out there right now is a total of 100,000 for the first 41 days or so of the program. There are a few of you who think this is all simply explained by suggesting nobody will enroll until the last minute. Keep trying…

I’ll be honest. I don’t think anything can be done at this point. We warned you, and now were stuck downstream without a paddle. Do you think the administration can just postpone this debacle? Even if they could (they can’t) it would cost the government and insurance companies millions of dollars to restructure and re-price plans that have been canceled. You simply can not make changes during the open enrollment period.

In short, there is no workable Plan B! From Health Care Policy and Marketplace Review, with a hat tip to Hot Air.

Millions of people are facing those cancellation letters. Ideally, we could just say, never mind––let these people simply stay on their current policies. But here’s maybe the biggest irony in this whole mess. The Obama administration may not be ready for Obamacare but the insurance industry is. The health insurance companies spent the last many months rolling their old policies off the books and replacing them with the 2014 Obamacare compliant products––Bronze, Silver, Gold, and Platinum.

What Romneycare has cost Massachusetts

More of your tax dollars at work

Is Obamacare becoming a laughing stock?

Why I love Texas

Pistol permit applications in Newtown, Conn. up 110%
Scroll to top