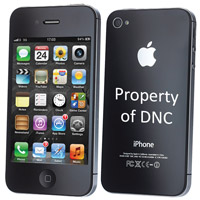 Must have been quite the party. About two weeks ago, the Democratic National Conventions committee reported to the Charlotte police that almost $500,000 in electronics went missing during their convention last summer. About 13 percent of the electronics they sent are gone.

The original ABC News report is all wrong, and they have not bothered to correct it. Many other bloggers picked up on the original ABC News story and when I first read it, I was thinking the computer-generated police report only told a small portion of the story. Sure enough, the DNC provided what looks to be an Excel spreadsheet with more than 800 individual missing items [PDF, 240kb] to the police department, and someone in the police department had to enter all that stuff in … who wants to do that?

Why the heck would the DNC need to have a stack of iPhones and MacBook Pros anyway? I really don’t get it. People come to these conventions – any conventions – with their own computers and phones, so why would the DNC need to have a huge stack of electronics sitting around? From what I can tell from the PDF document – sorry, you’ll have to magnify it when you open it up to see everything – is that the DNC packed up everything in trucks and sent it to Charlotte. When the stuff came back from Charlotte, they completed an inventory and stuff was missing. The stuff happens to include 77 flat-screen TVs, more than 100 Apple computers, 42 Apple iPads, 40 of the Apple Magic Mouse things, and even LED Cinema displays. Apple was not the only target, people took the HP and Blackberry stuff too. They took almost $100,000 worth of HP computers.

The Daily Caller is focused in on the ABC report that was totally wrong, but I think the real story here is what the heck was all this stuff doing there?

This looks to be some sort of free-for-all after President Obama’s speech ended and people started packing up. That’s the only way to explain it … people just started taking stuff. I understand you need computers and such for registration, running displays and such … but what the heck? For registration you have a company come in and put in dummy terminals hooked up to the internet with cheap keyboards and corded mice … you don’t use MacBook Pros and a Magic Mouse or a Trackpad.

Look, big politics is big money … really BIG money. People make a living working on elections and that of course, is part of the problem if you don’t know already. For those of you who contributed to the DNC to help promote the Obama campaign, how do you feel about a half-million dollars worth of the stuff you paid for disappearing? There were people at that convention – either attending or working there – who thought they were entitled.

Symptom of the Disease: GOP and Democrats spend big money on lavish events

Did the DNC put their foot in their mouths using a Chinese “news” agency to attack Romney?