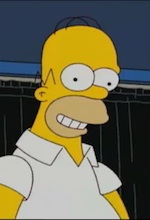 Egads. Really? Doh! I sure hope this isn’t a head fake, but then again, why not?

Your Tuesday morning wake up call. Put down that donut and BELIEVE. From the Telegraph.

But in an article headlined “Homer and Bart are Catholics”, the newspaper said: “The Simpsons are among the few TV programmes for children in which Christian faith, religion, and questions about God are recurrent themes.”

The family “recites prayers before meals and, in their own peculiar way, believes in the life thereafter”.

It quoted an analysis by a Jesuit priest, Father Francesco Occhetta, of a 2005 episode of The Simpsons, The Father, the Son and the Holy Guest Star, which revolved around Catholicism and was aired a few weeks after the death of Pope John Paul II.

The episode starts with Bart being expelled from Springfield Elementary School and being enrolled in a Catholic school where he meets a sympathetic priest, voiced by the actor Liam Neeson, who draws him into Catholicism with his kindness.

Homer then decides to convert to Catholicism, to the horror of his wife Marge, the Rev Lovejoy and Ned Flanders. The episode touches on issues such as religious conflict, interfaith dialogue, homosexuality and stem cell research.

“Few people know it, and he does everything he can to hide it, but it is true: Homer J Simpson is a Catholic,” insists L’Osservatore Romano.

I couldn’t find the episode but this ought to hold you.

If the infant Christ was God why couldn’t he speak?
4 replies

Reid: Obama like the Chilean miners
Scroll to top