I have to admit, when I first read the story about Homeland Security giving up on the Boeing virtual fence idea, I was ticked off, but I also figured if it was not going to work, I’d be fine with ditching the idea and coming up with a new one … like maybe a real fence.

From the New York Times…

Citing a plague of “cost overruns and missed deadlines,” Homeland Security Secretary Janet Napolitano said Tuesday that she would cut millions of dollars intended for a high-tech “virtual fence” along the Mexican border that has produced little more than headaches for the federal government.

Ms. Napolitano said her department would divert about $50 million in federal stimulus money intended for the project to other technological needs on the border, including laptops, radios, thermal-imaging devices and cameras requested by border guards.

In addition, she said, no money will be spent on expanding the project beyond two areas in Arizona where it is being tested until the department completes a reassessment she ordered in January. …

It [the Government Accountability Office] has released 14 critical reports that, taken together, point to a system that “was over-promised and under-delivered,” said Richard Stana, director of homeland security and justice issues for the office.

Just now, I read a post by Steve Gilbert at Sweetness & Light who sums up the issue.

Let’s say we start cutting every federal program that has been “was over-promised and under-delivered.” Let’s see what we have left.

Good point. We could save a lot of money and solve many problems by nixing over-promised and under-delivered programs. I wonder where we can start? 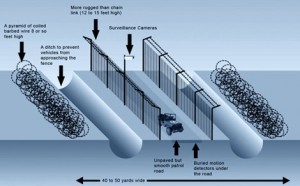 Allah at Hot Air is also commenting, and my cool newsreader search engine reminds us that in June of 2007, the new system was to be the backbone of the secure border initiative. Unfortunately, my newsreader also reminds me the border fence was scrapped the first time two years ago.

So the question stands. Why are they willing to ditch the purported backbone of the secure border initiative but completely unwilling to totally scrap other federal programs with lifespans of more than 40 years that are, well, total crap and have wasted not just millions, but billions of dollars?

SBInet [the Boeing virtual fence experiment] wasn’t what Congress had in mind. The Secure Fence Act of 2006 required the construction of 700 miles of new border fence along the 2,000-mile U.S.-Mexico border. “The Secretary of Homeland Security shall provide for at least two layers of reinforced fencing, the installation of additional physical barriers, roads, lighting, cameras and sensors,” the act said.

John McCain and the Open Border

Are we heading for an Øbama illegal alien trifecta?
6 replies